Rice: I am very proud and honoured to have been selected by England 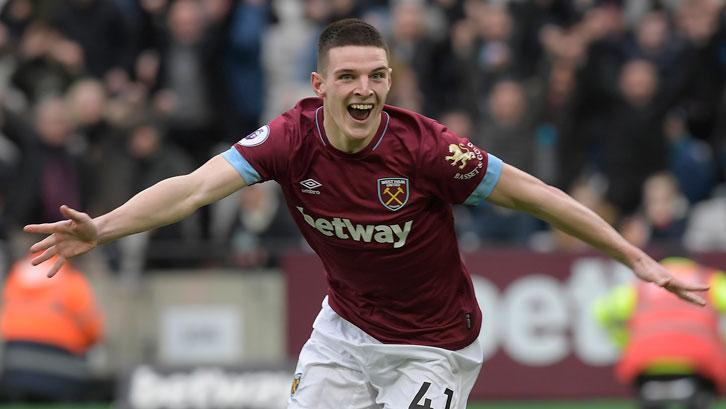 Declan Rice has expressed his pride at receiving his first senior England call-up.

West Ham United’s 20-year-old Academy of Football graduate has been selected by Gareth Southgate for the Three Lions’ UEFA Euro 2020 Group A qualifiers with Czech Republic and Montenegro at the end of March.

The call-up is the latest in a growing list of achievements for Rice, who has excelled in a deep-lying midfield role under Hammers manager Manuel Pellegrini this season and is now eligible for England duty after FIFA ratified his decision to switch international allegiance from Republic of Ireland earlier this month.

The No41 will hope to make his debut when the Czechs visit Wembley on Friday 23 March, or alternatively four days later in Podgorica – but he knows he needs to keep producing the goods in Claret and Blue, and on the training pitch when he joins up with the England squad at St George’s Park, if he is to be given the nod by Southgate.

“I am very proud and honoured to have been selected by England, and I am excited to start working with Gareth Southgate, the coaches and the rest of the squad following our match against Huddersfield Town this weekend,” he told whufc.com.

“As I said last month, I had an extremely difficult decision to make regarding my international future, but I have made that decision and now I just want to focus on the future, continuing to work hard and play as well as I possibly can.

“I know that nothing can be taken for granted, and there is still a lot of hard work ahead of me. However, I am looking forward to the challenge of trying to prove to the England manager that I am worthy of a place in his team, and hopefully continuing to progress my career in the right direction.

“I would also like to take this opportunity to thank the people closest to me for the fantastic support they have given me, and to say how grateful I am for all of the positive and supportive messages I have received in recent weeks.”

Everyone at West Ham United would like to wish Declan the very best when he joins up with the England squad following Saturday’s Premier League fixture with Huddersfield Town at London Stadium. Seats for that game are available now via the Ticket Exchange.

If you would like to be at the Home of Football for what could be Rice’s senior England debut against the Czechs, tickets are available here. Alternatively, both matches will be broadcast live in the UK by ITV.