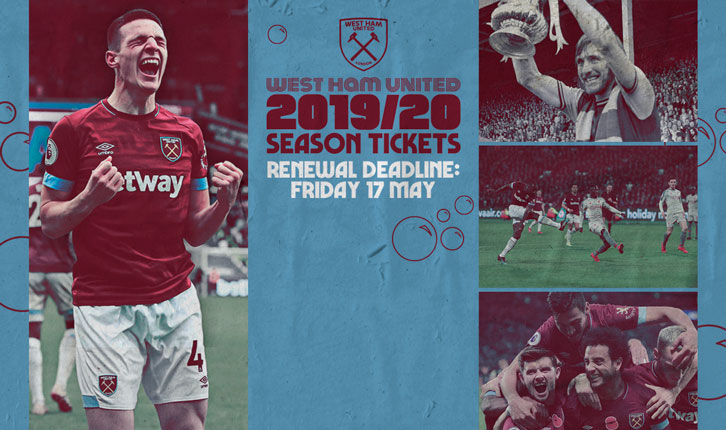 West Ham United fans have rushed to renew their Season Tickets for the 2019/20 season in their thousands, with a record number having already secured their seats for the new campaign.

The Season Ticket renewal process opened to supporters at 9am on Tuesday morning, with thousands of Hammers fans heading online or picking up the phone to book their seat at London Stadium over two months before the renewal deadline.

This follows the record sell out of the additional Season Tickets sold to the Waiting List in January, when the capacity of London Stadium went to 60,000 and the number of Season Ticket Holders rose to 54,000.

Joint-Chairman David Sullivan said: “With the team unbeaten at home so far in 2019, our loyal supporters have played their part in helping the team secure a series of fine results. We are delighted that so many of our loyal fans have taken their opportunity to renew so quickly for next season.”

A Season Ticket remains by far the cheapest way to enjoy watching West Ham United in action, with Adults saving over £400 per season compared to purchasing match-by-match, while Under-16s can save more than £500 over the course of the campaign.

With more Under-16 seats than any other club, and with prices frozen at £99 for thousands of existing Under-16 ticket holders – the equivalent of just £5.21 per game – London Stadium really is the home of affordable family football.

Season Ticket Holders also enjoy exclusive benefits, including having the first opportunity to buy tickets for away matches, discounts instore and online and on coach travel, and invitations to exclusive events.

If you wish to relocate your seat, we advise that you renew your existing seat at the earliest possible opportunity.

Relocations will be prioritised based on how early you renew, to enable relocation windows to be scheduled accordingly.