Chicharito: We cannot take any opponent lightly in the Premier League 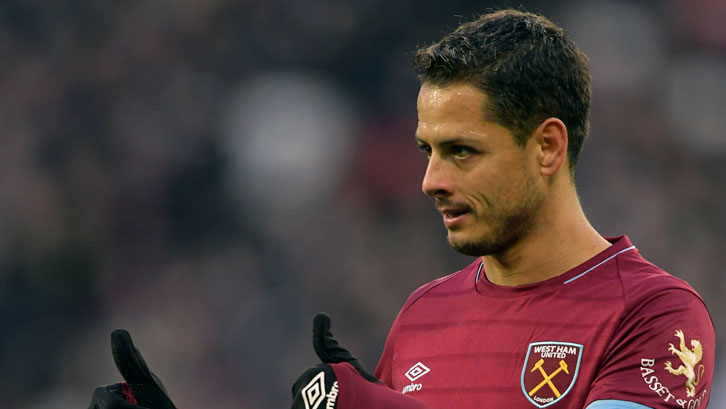 Chicharito says West Ham United cannot afford to take any opponent lightly if they are to secure a top-seven finish.

The Hammers missed an opportunity to close on Wolverhampton Wanderers and Watford when they lost at relegation-threatened Cardiff City on Saturday.

West Ham have now been defeated at Burnley, Wolves, AFC Bournemouth and Cardiff since Christmas. At the same time, the Hammers are unbeaten at home since 22 December and are still within five points of seventh-place Wolves with eight games to play and could still qualify for next season’s UEFA Europa League.

That mindset needs to change in this club and we need to do that between now and the end of the season and, if we can do that, we can still get seventh position

“When you want to be in Europe, you need to think like the top clubs and need to have that consistency,” said the No17, who has played in the UEFA Champions League for Manchester United, Real Madrid and Bayer Leverkusen. “You don’t need to think that if you are playing against teams who are fighting relegation that it will be a bit easier or that, if you’re playing against a top club you have nothing to lose.

“Those are the sort of traps you need to avoid and when you are a big club you don’t get involved with. You need to think and perform in the same way in every game so that, if you win, you are the best or if you lose, you are the worst.

“That mindset needs to change in this club and we need to do that between now and the end of the season and, if we can do that, we can still get seventh position.

“We need to have the motivation inside all of us that we want to be better players and want to win a spot in the starting eleven, because when you’re in a very good club you have 25 players but only eleven starters and everyone wants to play and wants to start.

“I guess that’s the mindset we need to have consistently. It doesn’t matter if we are playing against Liverpool or Manchester City or Cardiff or Huddersfield, we need to do our best and need to know that it’s going to be very hard and we need to put everything we have been doing in training onto the pitch and have our attitude that we are going to give 100 per cent to get the three points.”

The Hammers return to action this Saturday afternoon, when bottom side Huddersfield visit London Stadium, and Chicharito says the hosts have to be on their game if they are to secure three important points.

“All teams have their difficulties and their pros and cons,” he observed. “Sometimes you can see why they are there, but they can also be very dangerous.

“Every team we face is going to be the most difficult so far, so we can’t think that because they’re in a bad position that they’re going to be something different.

“We should expect they are going to be at their best – that’s why the Premier League is the most-competitive league in the world, because you never have an easy game.

“You can see that every team drops points. That’s the nice thing about the Premier League and we’re expecting a very difficult test against Huddersfield, who are fighting for their lives.”