Nasri: We should not feel inferior to any opponent 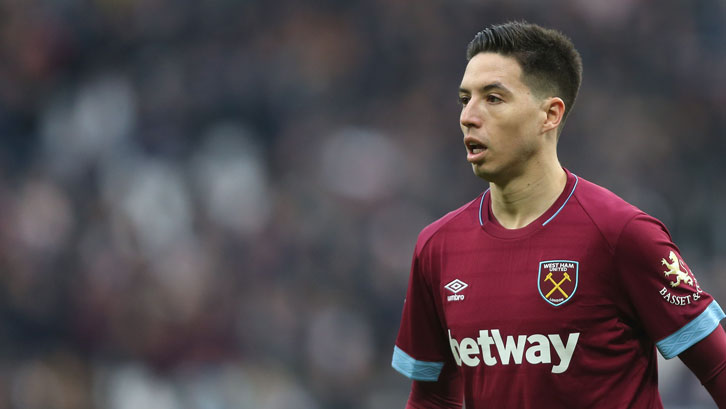 If West Ham United want to challenge for honours, everyone in Claret and Blue needs to have a winning mentality.

Manager Manuel Pellegrini has spoken repeatedly of the need for the Hammers to ‘play like a big team’ and midfielder and fellow Premier League winner Samir Nasri agrees.

The former France international knows what it takes to win trophies, having done so with Marseille, Manchester City – working under Pellegrini – and the French U17 side, and he says the Hammers need to believe they are capable of doing likewise if they are to beat the best on a regular basis.

It’s a way of playing. It’s that simple. And we have to be this type of team that goes anywhere and plays their football

“It’s a mentality – if you want to be a big club, you need to think like a big club. The manager says it all the time and it’s true,” the 31-year-old confirmed.

“For instance, I think that we don’t have to be inferior or think if we lose one-nil to Manchester City that it’s a good result. To be a big club and to achieve things, we need to play Manchester City the same way we play Newcastle.

“Only by playing and thinking like that will we get results. Look at Ajax in the week. Ajax went to Real Madrid, didn’t say ‘they are triple winners of the Champions League, they just went there, played football and they beat them.

“With the quality that we have, we shouldn’t be looking at other clubs and thinking ‘if we only lose one-nil it’s a good result’. We should go anywhere and try to play our football.

“At the end of the day, if we succeed, we succeed. If not, at least we won’t have any regrets. I think we can do great things if we play football against big teams.”

West Ham have opportunities to prove Nasri’s point over the closing nine games of the season, which includes trips to Chelsea, Tottenham Hotspur and Manchester United.

First up, however, is Saturday’s visit to Cardiff City, who will themselves kick-off in the relegation zone. A win in South Wales could see the Irons end the weekend just a point outside the top seven.

Should results elsewhere go their way too, victory at home to Huddersfield Town on 16 March could see them leapfrog Wolverhampton Wanderers and Watford into seventh place with seven games to play.

“That’s exactly the way that we should think and we should act,” Nasri continued. “If you look, it’s just something mental with the team.

“It’s a way of playing. It’s that simple. And we have to be this type of team that goes anywhere and plays their football.

“We also need to make sure we don’t lose points against the teams around us like Watford and Wolves, because it would be great for a club like West Ham with 60,000 fans to be playing European football.”