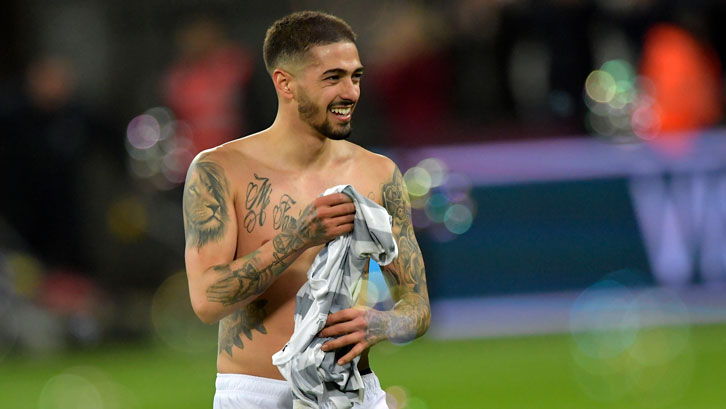 Manuel Lanzini’s successful return from injury has been rewarded with a call-up to the Argentina squad.

The West Ham United midfielder has looked sharp on his comeback after eight months out following knee surgery, impressing in the Premier League fixtures with Fulham, Manchester City and Newcastle United.

And Lanzini’s form has been recognised by Argentina head coach and former Hammers full-back Lionel Scaloni, who has included him in his squad for friendly internationals with Venezuela and Morocco.

While adding to his four Argentina caps is on his agenda, the No10 knows further international recognition will only arrive if he continues to catch the eye in a West Ham shirt.

“I am working first to stay strong in West Ham and, when I am playing well in West Ham, I think I will have the opportunity to play in the national team.”

When I am playing well in West Ham, I think I will have the opportunity to play in the national team

Argentina step up their preparations for the 2019 Copa America finals in Brazil by taking on their South American counterparts in the Spanish capital, Madrid, on Friday 22 March, before heading to Tanger to face Morocco on Tuesday 26 March.

At the Copa America, Scaloni’s side face Carlos Sanchez’s Colombia, Fabian Balbuena’s Paraguay and Qatar in the group stage as they seek their first continental crown since 1993.

After missing the 2016 Olympic Games, also in Brazil, and last summer’s FIFA World Cup finals in Russia through injury, the West Ham star is desperate to make it third time lucky and appear for his country at a major tournament.

“I am prepared for the Copa America,” the 26-year-old continued. “I have that ambition, but I know I need to play here, I need to play well, then I will have the opportunity.”

Meanwhile, Felipe Anderson has been included in the Brazil squad for friendly internationals with Panama and Czech Republic on 23 and 26 March respectively.