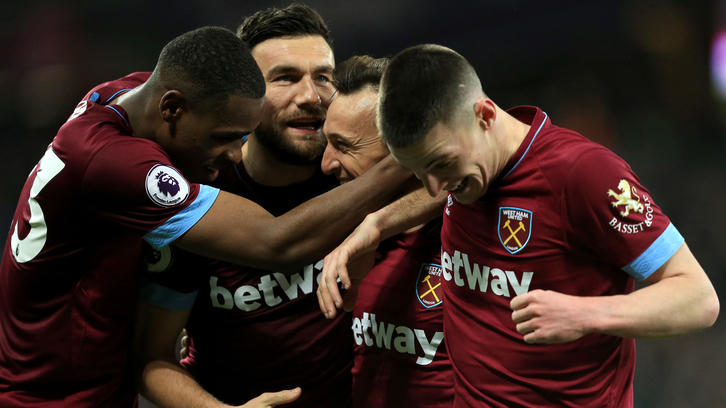 West Ham United marked the official unveiling of the Billy Bonds Stand at London Stadium with a deserved 2-0 win over Newcastle United.

Declan Rice and Mark Noble both found the net – with each scoring their second goal of the season – in the first half to ensure all three points remain in Stratford with Manuel Pellegrini’s side.

On an evening when the legendary Billy Bonds was recognised at London Stadium with the renaming of the East Stand in his honour, West Ham began Saturday’s match with a tempo and passion befitting the iconic captain.

It was fitting that the two men that put West Ham in control against Newcastle were both Academy graduates, much like Bonds himself.

Rice – heralded as the next big player out of the West Ham Academy – won the Young Player of the Year at the London Football Awards on Thursday, and continued his fine week by putting the Hammers in front, turning home Robert Snodgrass’ corner with a headed effort on seven minutes.

It was the perfect start on a perfect evening of tribute for West Ham.

Not that Newcastle were without opportunities. A pass through the Irons defence found Ayoze Perez, who tucked home. However, the Spaniard was a good yard offside, something the West Ham defence and the linesman had realised, with the effort immediately ruled out.

Manuel Pellegrini lost Aaron Cresswell on 34 minutes, with Arthur Masuaku replacing the No3, and the substitute made an immediate impact, driving forward on the left-flank and causing the Magpies issues.

Twice Issa Diop made crucial tackles in the first period to deny the away side, while Snodgrass almost earned his second assist of the game, dinking into Manuel Lanzini. The Argentinian was just millimetres away from a crucial touch and goal.

With five minutes remaining of the first period, Florian Lejeune brought down Chicharito in the penalty box, giving the home side a penalty. Up stepped captain Mark Noble, who confidentially dispatched the spot-kick for his second goal of the season.

Newcastle looked to begin the second half brightly as they tried to find a way back into the game. Both Isaac Hayden and Ayoze Perez tried efforts in the opening three minutes of the period, but each was wide.

As the hour mark ticked by, Chicharito was found by Masuaku with a sensational cross-field pass. The Mexican’s touch to bring the ball under control was equally sublime, but the angle had become too narrow, and his shot was into the side netting.

Angelo Ogbonna joined Diop in making a crucial block, with the Italian denying Salomon Rondon a certain goal with a perfectly-time stop, while Snodgrass’ attempt at the spectacular – a back-heeled finish – was denied at the other end with a similar interception.

Thanks to the work of the defence in front of him, Lukasz Fabianski enjoyed a relatively quiet afternoon, but the Poland international was on hand to make a crucial stop when needed. The No1 tipped Rondon’s free-kick onto the cross bar, keeping his clean-sheet intact.

Ultimately, the home side were able to hold on for a deserved win and the three points on an evening where each player showed the quality, held their own and played with pride. The most fitting tribute for Billy Bonds.