Pellegrini: Newcastle, honours for Felipe and Declan, and honouring Bonds

Hammers boss Manuel Pellegrini knows his team will need to operate at their best if they are to see off the challenge of Newcastle United at London Stadium on Saturday.

The east Londoners may have triumphed 3-0 on their visit to Tyneside earlier in the season, but Pellegrini is under no illusions as to the test which the Mapgies are likely to offer on this occasion.

Newcastle have won four of their last six to climb six points clear of the bottom three so arrive in the capital full of confidence, but the manager believes the eleven he chooses will be ready to counter that…

I think that in both cases, in December and now, Newcastle were in a good moment. When we went to Newcastle and beat them there, they had come from a run of three games in a row winning.

Now, I think they are a more consistent team, a difficult team to score against because they don’t concede too many chances. They have also won their last two games at home, so they are having a good moment.

They also have some new players, like Almiron, who has changed their attacking options a little bit, so we know we are going to have to play a very good game if we want to get points here.

Almiron is a player who made very good seasons in America. He is a very good player and I think he will be successful at Newcastle.

Good news for Dec and Felipe 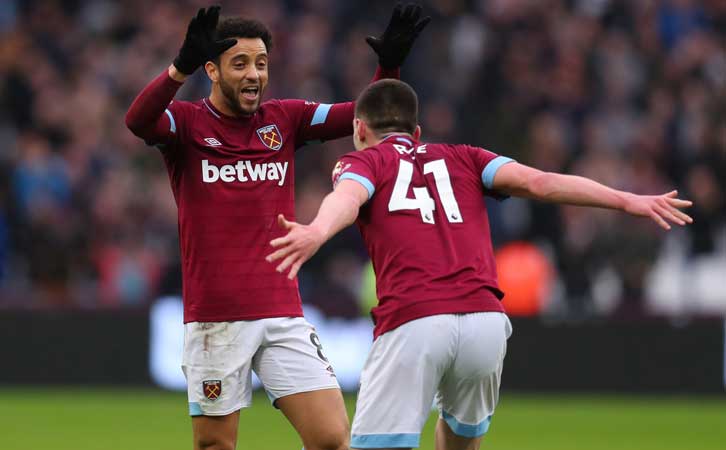 Their news this week of course is good for the squad. I think that both of them, Felipe and Declan, deserved what they received yesterday, the London Young Player of the Year Award and the nomination for the Brazilian national squad, because they are both doing a very good season.

They are improving, both of them, they are young players – Felipe just 26 and Declan 20 – so for me as a manager I am very happy and for the club it is also good.

It is very good news that the stand will be named after Billy Bonds. He is an Important player at this club, for the amount of games he played for West Ham, and the trophies also he won with this club.

We must remember that always, both the fans and the young players here. I think it is a very good idea from the club.