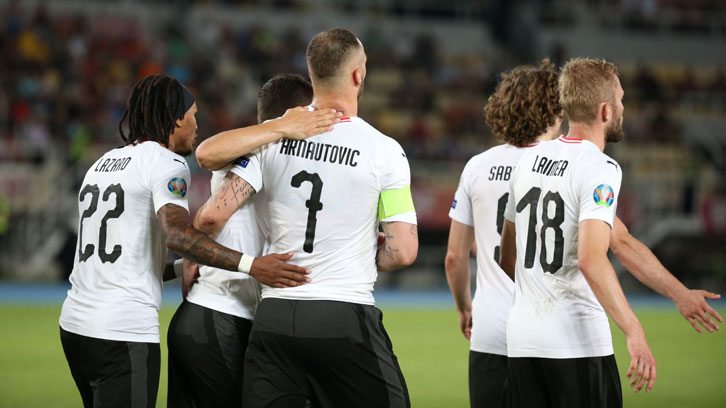 Marko Arnautovic has set his sights on UEFA Euro 2020 after scoring twice in a vital 4-1 qualifying win in North Macedonia on Monday evening.

The West Ham United forward was in outstanding form for his country in Skopje, where he captained his country for the third time in the absence of regular skipper Julian Baumgartlinger and the injured David Alaba.

After falling behind to an own-goal, Austria roared back to secure a deserved victory – their second in four days after Friday’s 1-0 success against Slovenia in Vienna – that puts them back in with a chance in Group E.

"I've always trusted my team,” said Arnautovic. “We played a very good game against Slovenia and then were clearly superior on Monday

“We just had to stay calm after the first two games [which Austria lost] and I always knew we would win the game.

“In the last two games we have also playfully convinced our combination play between the lines was very good."

After Valentino Lazaro had equalised before half-time, Arnautovic took control, putting Austria ahead from the penalty spot before converting Marcel Sabitzer’s cross with his head to all but make the game safe.

For the Hammers striker, leading his nation to victory was a special moment.

“Being captain is an honour, I keep mentioning that, but it's the same motivation as when I'm not wearing the armband, I always want to give 100 per cent and try to talk to my team, motivate them and bring them along by playing to win,” he explained, before expressing his desire to continue Austria’s recent renaissance and reach next summer’s tournament.

“The players need to know how nice it is to be at the Euros and I told them that again.

“I know what the team is capable of, we have a lot of talented footballers, we can play football well, everybody sees that, everybody knows that and we have to show that.”