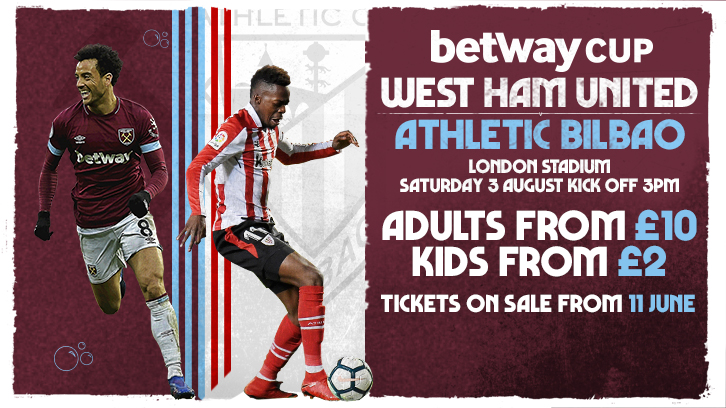 Bilbao will head to east London on Saturday 3 August, with kick-off at 3pm, as Manuel Pellegrini’s men put the final touches on their preparations for the new campaign with a prestigious game against one of Spain’s most successful outfits.

Deeply rooted in the Basque Country of north-eastern Spain, the club famously has a policy of only signing players from their home region, and this will be the third time the Hammers have faced them, dating back to 1921.

In keeping with the Board’s commitment to affordable family football, tickets for the game will start at just £2 for U18s and £10 for adults, and will be available to purchase from Tuesday 11 June, to allow the Season Ticket relocation window to take place.

Season Ticket Holders, who can also access additional savings on match day tickets in Bands 4 and above, will have a two-week window to secure their own seat, with tickets available online, over the phone on 0333 030 1966 or to personal callers to the London Stadium Ticket Office.  Full pricing details are as follows:

Hospitality packages are also available, starting at just £55 per person, meaning you can watch the Hammers take on one of Europe’s most illustrious sides in style.

This summer’s Betway Cup fixture is the first on home soil since the visit of Juventus in August 2016 and will mark the third time West Ham have faced Athletic Bilbao in their history.

Bilbao played host to the Hammers as long ago as May 1921, when the Irons visited the Basque city for a four-match post-season tour, taking on teams representing Madrid, Vigo, Bilbao and Coruna over the space of eight days.

Syd King’s side won all four matches, including a 2-0 victory over host club Athletic at the iconic San Mames Stadium.

Nearly eighty years later, in August 2000, Bilbao visited the Boleyn Ground for Julian Dicks’ Testimonial Match, which ended in a 2-1 win for the Spanish side.