The 33-year-old shot-stopper and son of Irons legend Alvin Martin will join the Hammers on 1 July after agreeing a two-year deal, with the option to extend for a further 12 months.

“Signing for West Ham United is a dream, both for me and my family,” Martin told whufc.com. “I’ve grown up around West Ham and to come to my boyhood club is a dream.

“I came to games as a kid as one of the supporters in the stands at the Boleyn Ground. I loved watching my Dad play, and I’ve continued coming to games throughout my career.

“You can see the impact the fans can have on the team and it gives you goosebumps. The fans at West Ham are brilliant and it’s fantastic to be a part of this great club.

“I’ve always been an enthusiastic and positive person - I’ll always go into training every day with that attitude to compete with Lukasz (Fabianski) and Roberto.”

Signing for West Ham United is a dream, both for me and my family

Director of football Mario Husillos has welcomed Martin to West Ham and believes he will provide significant competition for Lukasz Fabianski and fellow new acquisition Roberto after a glowing recommendation from goalkeeping coach Xavi Valero.

Husillos said: “We are happy to sign David Martin. He was excited about our project from the first moment we spoke to him.

“As well as knowing his career and his last season in the Championship, we also had excellent reports about him both as a professional and as a person from Xavi Valero, our goalkeeper coach, who has worked with him before at Liverpool.

“Because of all these reasons, he was an obvious target and we are pleased to have him at the Club.”

Born in Romford, the son of FA Cup winner Alvin Martin began his professional career with Wimbledon in 2003 and remained with the team after its reformation as Milton Keynes Dons.

A 19-year-old Martin was signed by then-Champions League holders Liverpool in January 2006 and was a regular feature in the Reds' reserve side and also consistently part of the club’s first-team squads.

Loan spells with Accrington Stanley and Leicester City followed for Martin, with the new Hammer playing 25 times in League One for the Foxes as they secured promotion as champions in 2009. 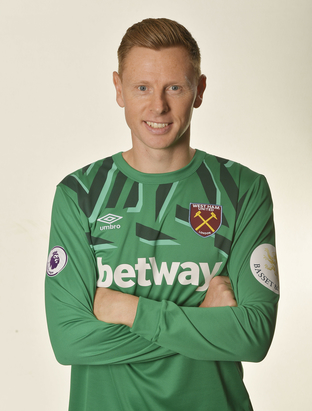 Further loans with Tranmere Rovers and Leeds United followed and Martin was in the Whites’ squad alongside Robert Snodgrass.

Following a month loan with Derby County, Martin joined MK Dons as Karl Robinson’s first signing at the club. The goalkeeper would spend a further seven seasons with the side, reaching 339 appearances in total for Dons.

During this time, he was named the club’s Player of the Year in 2015/16, the side’s first year in the Championship, while he also kept a clean sheet as they famously beat Manchester United 4-0 in the Capital One Cup in 2014.

Martin signed for Millwall in September 2017 and played 15 times in over the past two seasons.

At international level, Martin has played for England up to U20 level, having also played in the team that finished runners-up to France in at the UEFA European U19 Championship in 2005.

Martin and Roberto’s arrivals will pave the way for Nathan Trott to gain some valuable experience of first-team football on loan during 2019/20, as well as give the Academy goalkeepers the chance to develop alongside the aforementioned duo and Lukasz Fabianski.

Everyone at West Ham United would like to warmly welcome David to the Club and wish him every success in Claret and Blue.