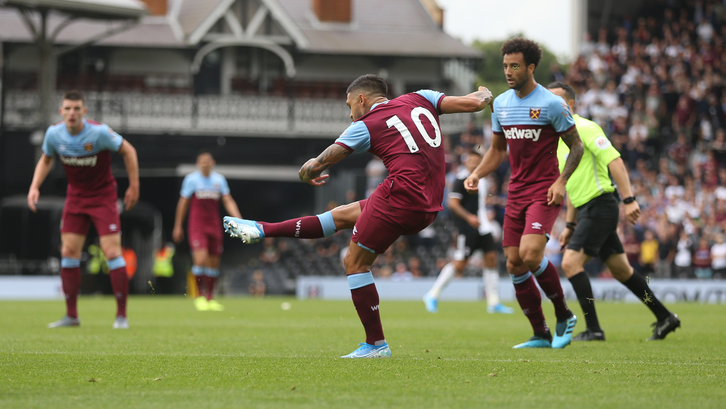 Manuel Lanzini’s stunning finish was enough to West Ham United to see off a game Fulham side and claim a pre-season 1-0 win at Craven Cottage.

In a match where Sebastien Haller and Pablo Fornals made their respective Hammers debuts, it was West Ham’s resident Jewel that proved the difference, curling home a spectacular strike from the edge of the box on 18 minutes.

Haller himself went close to doubling the lead in the second half, seeing a followed-up shot somehow kept out, while Michail Antonio also went close in a thrilling match in ever-changing conditions.

The hard work on the training fields in Switzerland, China and at Rush Green was evident from the first whistle. West Ham looked comfortable in and out of possession during an impressive opening 45 minutes.

The work on a high, attacking press was evident too. Just five minutes in and Felipe Anderson was able to steal in on a poor ball, fizzing a cross into debutant Haller. The effort was cleared, courtesy of some last-ditch defending, but it set the tone for an encouraging opening period.

Pablo Fornals was the next to steal in, taking the ball from Maxime Le Marchand. Again, Anderson received the pass and crossed in. This time, captain Aaron Cresswell was on the end of the ball, but his volley was cleared out for a corner.

Fulham’s chances were shortened mainly to long balls forward, and there was a close call when Anthony Knockaert's cross was almost met by Aleksandar Mitrovic, but the Irons defence saw the ball away.

Moments later, Lukasz Fabianski shows why he was named last season's Hammer of the Year, as he made a quite brilliant one-handed stop to deny Ivan Cavaleiro's curling effort.

The save proved crucial as Lanzini’s opener came just moments later. The midfielder collected the ball from a knock-back and had all the time in the world to pick out his spot from the edge of the area. He curled his shot past Marcus Bettinelli and into the net via the underside of the cross-bar.

Having dominated the first half, it was perhaps natural that West Ham would see Fulham look to come back early in the second period. Anthony Knockaert skipped past substitute Arthur Mausaku early on, only for Declan Rice to clear.

The left-back’s attacking ability was on display moments later, as he whipped in a sensational cross. A corner was the result, and Haller could have made it 2-0 from the set-piece, seeing a header and a follow up shot well saved by goalkeeper Marcus Bettinelli.

A Fulham free-kick just after the hour was deflected and resulted in an almost perfect West Ham counter-attack. Robert Snodgrass picked out Andriy Yarmolenko, with the duo combining to play in Michail Antonio. The No30’s shot would have certainly found the net had it not been blocked.

Fulham’s best chances to level came through Aboubakar Kamara. The striker saw a curling effort go not far wide on 69 minutes before a low effort fizzed past the far post a few moments later.

Antonio would go close again for West Ham, as a powerful drive was somehow kept out, but Manuel Pellegrini’s Irons held on for a valuable pre-season victory against Scott Parker’s Cottagers.