Halajko: Three games in seven days is a physical and mental test 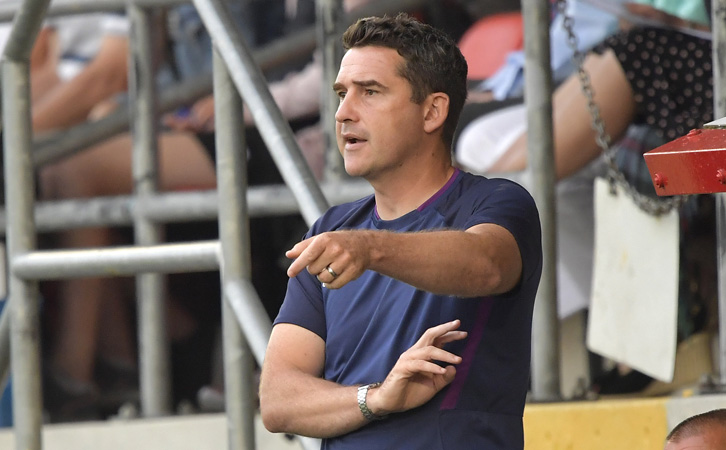 New West Ham United U23s Head Coach Dmitri Halajko was pleased after seeing his side draw 0-0 with Dagenham and Redbridge on Friday night.

The Hammers dominated the ball for large parts and were impressive against their National League opposition.

The match starts a run of three games in a week as the U23s travel to Reading and RSC Anderlecht as they step up their preparation ahead of the Premier League 2 campaign.

Friday’s game was Halajko’s first game in charge and he was pleased by his team’s efforts.

“I thought our build-up play was good,” he said.  “We dominated the ball which is what we wanted to do. We built up well from the back, but we missed out on some of that quality in the final third to really finish off the job and score the goals that maybe our possession deserved.

“We wanted to win today’s game. We didn’t quite manage to do that, but we managed to keep a clean sheet, so we are starting to look at that performance side of things now, not just the fitness.”

It was the U23s' second pre-season game against senior opposition and their physicality again shone through.

“You’re playing against men and some of our boys are in their teenage years so it’s always going to be a test," Halajko continued.

“Second half we dealt with it better than the first half so that’s a side of the game that our lads have to improve and today will help them do that.”

The midfield trio of Alfie Lewis, Joe Powell and Conor Coventry were excellent at retaining possession throughout with Coventry in particular standing out.

“Conor is a good player, he’s been established at this level for a long while. It’s nice to see him getting on the ball and dominating play and that’s what we want from him.

“We want a ball-player and a ball-winner and someone who can conduct things from the middle of the park and there were times today when we really showed that.”

“Reading and Anderlecht will be two big tests you won’t get anything from those two clubs unless you put in a top, top performance.

“I think the technical and tactical side of the game will really be pushed and that’s what we want from pre-season, we want to test the lads and push them as far as we can and by the end of the next seven days we should know even more about them.”