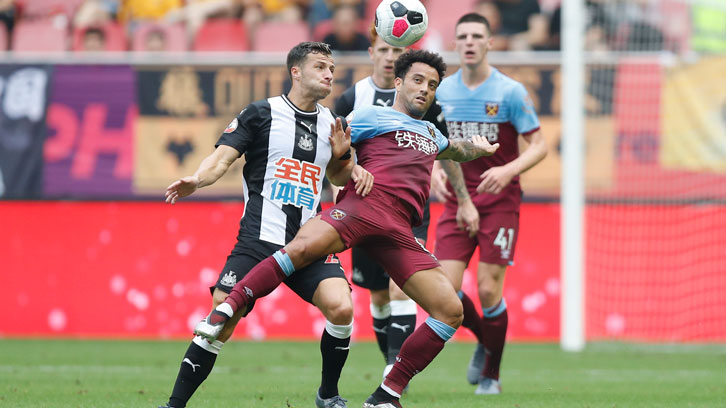 West Ham United’s week-long trip to China ended in disappointment as the Hammers were defeated 1-0 by Newcastle United in the Premier League Asia Cup third/fourth-place play-off.

The east Londoners dominated possession for long periods at the Hongkou Football Stadium in Shanghai, particularly in the second half, but were unable to seriously trouble Newcastle’s Slovakian goalkeeper Martin Dubravka.

Indeed, the Hammers’ best opportunities came mainly from headers, with Felipe Anderson going the closest when his effort from Robert Snodgrass’s 63rd-minute corner clipped the top of the crossbar.

Earlier, Chicharito had looped an effort over the top from a Manuel Lanzini free-kick. Then, after the break, Jack Wilshere saw his shot blocked by Javier Manquillo and a stretching Michail Antonio later nodded the England midfielder’s cross too high.

At the other end, Winston Reid and Declan Rice, who played the second 45 minutes at centre-half, were called into action regularly, making a succession of important clearances and interceptions, while Lukasz Fabianski made his first preseason appearance in goal.

Newcastle did not create much themselves, in fairness, although they have the ball in the West Ham net for a second time late on, but Sean Longstaff was flagged offside as he converted Jonjo Shelvey’s fizzing cross-shot.

In truth, the hot and humid conditions made for a slow-paced, bitty game which bore no resemblance to the usual high intensity of the Premier League, which kicks-off three weeks from today.

While the result would not have been to Pellegrini’s liking, the physical demands of training and playing in Chinese summer weather will have benefitted his players, while the Hammers also return to England with a near clean bill of health, with only Issa Diop nursing a minor back injury.

The Irons fly to London on Sunday before having a day off, then return to Rush Green on Tuesday, when they will be joined by new signings Sebastien Haller and Pablo Fornals, along with the returning Fabian Balbuena and Arthur Masuaku.

West Ham continue their preseason schedule with a visit along the River Thames to Fulham next Saturday, before taking a short trip to Austria, where they will face German Bundesliga side Hertha Berlin. Preseason will end with the Betway Cup visit of Athletic Bilbao to London Stadium on Saturday 3 August.