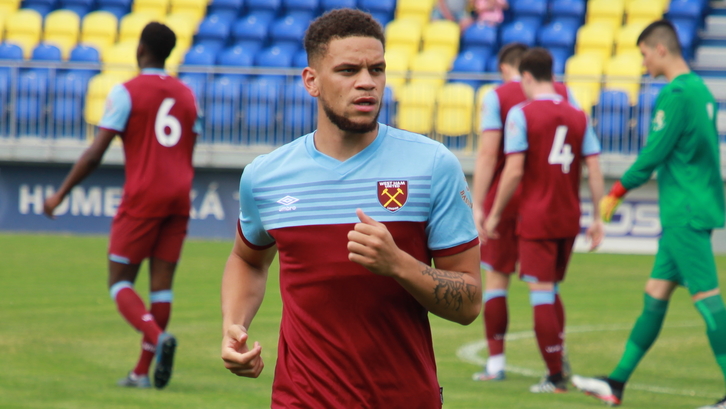 West Ham United U23s’ pre-season trip to Slovakia came to an end with a merited and classy 3-1 win away to FC Humenne.

Marcus Browne put the Irons in front on 36 minutes, completing a terrific team move, while a clever and innovative goal by Ajibola Alese doubled the lead just after half-time.

Forward Jordan Hugill completed the win for the U23s with a rocketed volley, ensuring the Irons leave Slovakia with a collective smile after two wins in two friendlies.

Having come from behind in Tuesday’s victory away to FC Kosice, West Ham put themselves ahead in the first half of Saturday’s clash on 36 minutes thanks to a beautiful, flowing team move crafted in the heart of the Academy of Football.

Fantastic wing-play by Nathan Holland created the space needed and the No11 linked up with Joe Powell on the edge of the area. From there, the ball was whipped into space on the six-yard line, where Browne coolly tucked home to give the Irons the deserved lead.

It had been Humenne that enjoyed the first chance of the game, with shot-stopper Krisztian Hegyi forced to deny Marek Mihok from powering home a volley.

Flowing football seemed to be the order of the day for West Ham, with another fantastic move playing in Mesa Dju, only for the Portuguese youngster to be called offside. Jordan Hugill also saw a strong effort go just over the bar.

As the first half closed Humenne came within a whisker of equalising. A fantastically whipped free-kick seemed certain for the roof of the net. If not for Hegyi’s fingertip stop, pushing the ball onto the bar, the score would have been level going into half-time.

If the Hammers were a touch fortunate to be in front as the first half ended, there was no doubt as to the better team when the final whistle was blown.

Mere moments after the restart, West Ham could have been two ahead as Alfie Lewis set Holland away with a smart pass. The No11 tucked home, but his effort was cancelled out by the linesman’s flag. Offside.

The decision did not deter the Irons, however. In fact, it seemed to inspire them. Dju saw a shot saved after some fantastic work on the flank before the travelling Academy side doubled their advantage just before the hour mark.

It was a clever finish too by centre-back Alese. Browne’s free-kick was dangerous and, as the ball bobbled in the area, Alese showed his creativity in back-heeling an effort past the goalkeeper and into the bottom corner of the net.

Less than ten minutes later and it was 3-0, and another ingenious move created the goal. Hugill found Holland with a quick pass and move. The winger whipped in for the striker to attack, and Hugill duly obliged, volleying into the net with a clinical strike.

There was still time for substitute Dan Kemp to go close with a volley of his own and, although Humenne got on the score-sheet in the closing moments, West Ham’s victory was never in doubt, as Steve Potts’ side ended their pre-season camp in Slovakia with a deserved, stylish victory.