The 18-year-old makes the move from her home country to England to link up with the Irons for the Club’s second season in the Barclays Women’s Super League. She will wear the No15 shirt.

“I have wanted to play in England since I was eight-years-old and, in joining West Ham United, my dream has finally come true,” Galabadaarachchi told whufc.com.

“I really like the way West Ham look to play football and the values the Club holds. Making this move is a dream for me; a dream that’s become a reality!”

Making this move is a dream for me; a dream that’s become a reality!

With her electric pace and silky feet, head coach Matt Beard believes Galabadaarachchi will prove to be a shrewd acquisition for the Hammers.

Beard is looking forward to working with the newest signing on the training fields at Rush Green.

“I’m delighted to welcome Jacynta to West Ham United,” Beard said. “She has got enormous potential, at 18-years-old, and I’m very excited by what she offers.

“I’ve seen a lot of young players, and I like working with and developing young players, and she is one of the best I have seen, in terms of ability. Moving to England from Australia at 18 is a big step for her and we want to help her settle in well, and I’m confident she will have a fantastic first season with us.”

Considered one of the finest young talents in world football, Galabadaarachchi was offered the chance to move to England as a youngster, training with the likes of Manchester City, before signing with Melbourne City at 15. 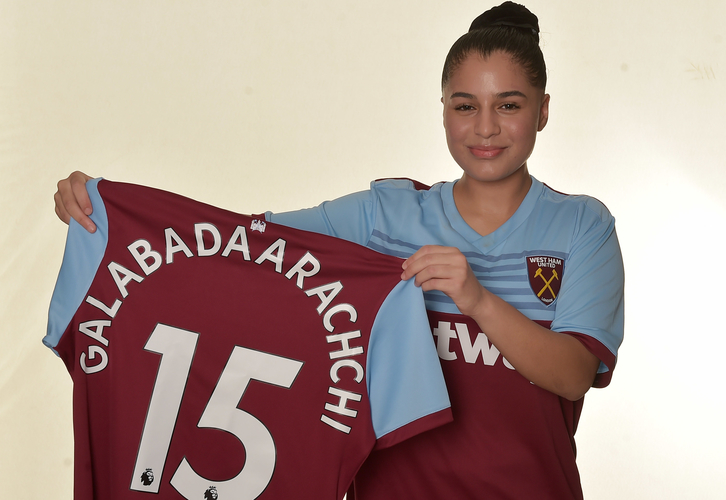 Following a brief spell with Melbourne, during which she helped her side win the W-League, Galabadaarachchi moved to Perth Glory in 2018, making five appearances. With her help, Perth finished fourth in the W-League and reached the W-League Grand Final.

Galabadaarachchi’s efforts saw her named in an Australia National Team training camp ahead of the 2017 Algarve Cup. She has represented her country at Under-17 level.

Everyone at West Ham United would like to welcome Jacynta to the Club and wish her every success in Claret and Blue.