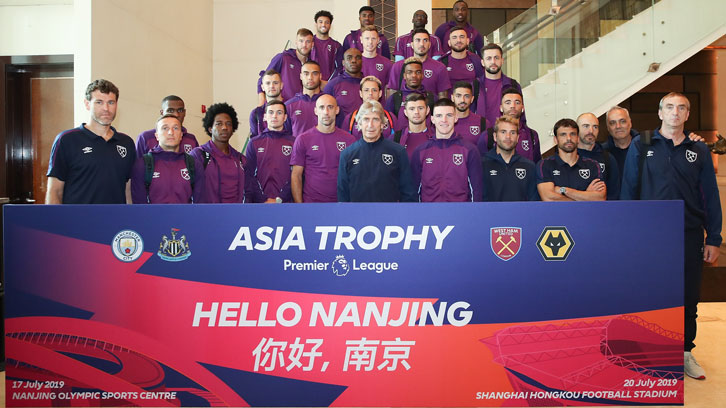 West Ham United have arrived in the Chinese city of Nanjing for the Premier League Asia Trophy 2019.

The Hammers touched down in Shanghai before taking a short flight to the ancient capital - Nanjing literally translates as 'Southern Capital' - on the banks of the famous Yangzi River, where they will face Manchester City in their semi-final on Wednesday evening.

The other competing teams, Newcastle United and Wolverhampton Wanderers, will also square-off at the Nanjing Olympic Sports Centre before all four clubs head to Shanghai for the final and third/fourth-place play-off on Saturday 20 July.

Manuel Pellegrini, who returns to the country where he managed Hebei China Fortune for two seasons between 2016-18, has named a 23-man squad, including summer signings Roberto and David Martin, fellow goalkeeper and Hammer of the Year Lukasz Fabianski, captain Mark Noble and England’s Declan Rice.

Alongside Noble and Rice, it was Chicharito, Jack Wilshere and Felipe Anderson, who has played in China three times previously for Lazio and Brazil U23s, who attracted the most attention from the hundreds of Chinese supporters who had gathered at the team hotel prior to their arrival at around 1pm local time.

The senior players not to make the trip to the Far East were the Hammers’ third summer capture Pablo Fornals, Paraguay defender Fabian Balbuena and DR Congo full-back Arthur Masuaku, who were given time off following their respective summer international commitments.

This year’s edition of the Premier League Asia Trophy marks the first time the biennial tournament will take place in two different locations.

It also marks the second time West Ham have participated in the competition, with the Irons’ other appearance – in 2009 – coinciding with the last time the tournament was held in mainland China. That competition ten years ago pitted the Irons against Tottenham Hotspur and Hull City in Beijing.

Ticket information for both West Ham fixtures can be found here.