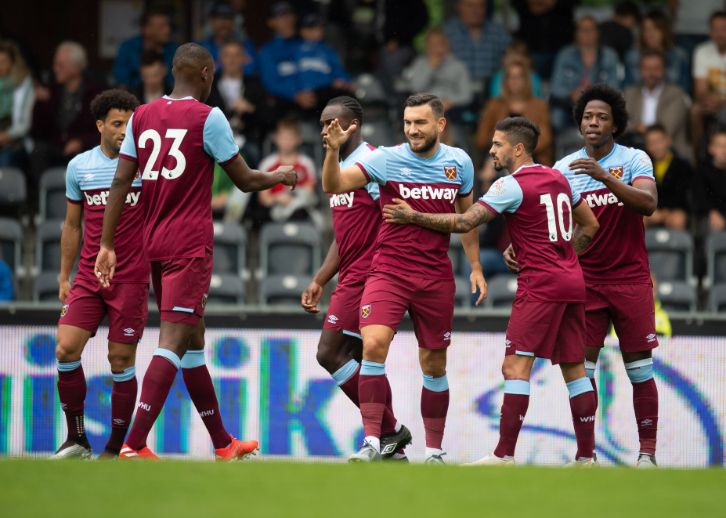 West Ham United kicked-off their 2019/20 preseason schedule with an entertaining 3-2 win over SCR Altach in Austria.

The Hammers travelled over the border from their Swiss training camp in Bad Ragaz to take on the team which finished eighth in the Austrian Bundesliga last season.

After ten days of hard work in the mountains, the Irons played their part in a five-goal thriller at the superbly-named Stadion Schnabelholz.

Manuel Pellegrini handed a debut to goalkeeper Roberto, but it was one of his first signings, Carlos Sanchez, who headed the Londoners in front from Robert Snodgrass’s left-wing corner inside six minutes.

With both teams playing decent football on an immaculate playing surface, chances were created at both ends during an action-packed opening half.

Angelo Ogbonna cleared off the line from the impressive Malian teenager Ousmane Diakite and Manfred Fischer fired wide before West Ham doubled their lead in direct style midway through the half.

After some patient passing in their own half, Mark Noble launched the Hammers forward with a long, straight ball over the Altach defence. Michail Antonio broke the offside trap, rounded goalkeeper Martin Kobras and slotted in his side’s second of the game.

Ben Johnson then clipped the crossbar with a curler but Altach kept at it, to their credit, and halved their arrears moments later when Emir Karic’s low cross was swept home by the lively Fischer.

The same player tested Roberto again before West Ham created a decent chance for a third, only for Felipe Anderson’s chip to be headed off the line by Jan Zwischenbrugger.

Referee Felix Ouschan brought the half to a close without any added time, but not before Roberto had made another comfortable save from Christian Gebauer.

But the Spaniard could do nothing to prevent the same player equalising three minutes after the break, when the Altach No7 confidently converted after good work down the right flank from Brazilian full-back Anderson.

The game continued to ebb and flow and the fifth and final goal of the game arrived on 58 minutes.

The returning Andriy Yarmolenko, who was one of eight substitutes introduced at half-time alongside, among others, Winston Reid, won a corner on the right. The set piece was taken short and another substitute, Jack Wilshere, delivered a left-footed cross that Issa Diop stooped to head past Kobras from 12 yards.

The game lost some fluency in the closing half-hour, with Altach bringing on nine substitutes of their own and Declan Rice making his return to action in place of Diop for the final 20 minutes.

All in all, it was a decent workout for Pellegrini’s men in front of an enthusiastic crowd of 2,981, including a good number of loyal and vociferous Hammers supporters.

The Irons will fly back to London on Thursday evening before preparing to head to China for the Premier League Asia Trophy at the weekend.