Snodgrass: Everyone at West Ham buys into Pellegrini’s project 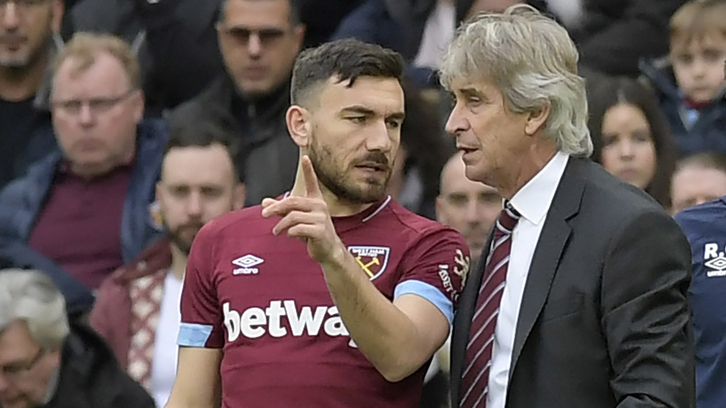 Robert Snodgrass says working with West Ham United manager Manuel Pellegrini has been a huge learning experience and feels everyone associated with the Club is buying into what the manager is trying to accomplish.

The Scotland international penned a one-year extension to his Hammers deal recently, lengthening his deal until the summer of 2021, with the option to increase the contract by a further 12 months also included.

The midfielder has established himself as an integral player in the West Ham squad under Pellegrini, who is himself kicking-off his second season in charge of the Premier League side, and says the Chilean holds a wealth of valuable knowledge.

“He is brilliant,” Snodgrass told whufc.com. “I’ve really enjoyed working with the manager. I think you go through a stage where you’re constantly asking questions because you’re learning every day, and when it’s like that you need to bring results with it.

“I think supporters will agree that we had some good performances at London Stadium last season, and away from home as well. I also think the manager was happy because, although we didn’t perform in those first four games, we got to grips with our problems and picked up better results.

“Football is a results-based business and when it’s going well like it has been, everybody buys into what we’re trying to do here.”

Football is a results-based business and when it’s going well like it has been, everybody buys into what we’re trying to do here.

For Snodgrass, the most important thing now is to build on the 2018/19 campaign and try to improve both individually and collectively. Under Pellegrini’s guidance, the 31-year-old is confident he and the Hammers can do just that.

The No11 continued: “For me, it’s about trying to build on last season now. I want to try and get more goals and more assists and be the best teammate I can be. I will take it one per cent at a time and do the best I possibly can.

“I’m driven by a desire to be a better player, to listen and to learn. We’re all constantly learning, and the manager and his staff will want to implement more, new ideas this season. To be a part of that going forward, I’m delighted.”

The Hammers boast a plethora of attacking talent in the team heading into the 2019/20 season. Along with Snodgrass, the likes of Felipe Anderson, Manuel Lanzini, Jack Wilshere, Andriy Yarmolenko and new signing Pablo Fornals will be competing for those creative berths.

The Glaswegian is relishing the battle for a starting berth in the new campaign and also feels his experience and age mean he also has a responsibility to help develop his fellow creative talents even further.

He added: “I’m an older, more experienced player now and it’s my job to drive my fellow creative players forward and get the maximum of out them and myself.

“Whether it’s through showing work-ethic at the training ground or just by being a good teammate, it is about driving each other and trying to achieve the best results. For me, that is key.”