West Ham United are pleased to confirm the signing of Portugal U20 international forward Mesaque Dju.

The 19-year-old joins the Hammers from Portuguese club Benfica on a three-and-a-half-year contract on a free transfer and will begin life in Claret and Blue as a member of Liam Manning and Steve Potts’ U23 squad.

The teenager is looking forward to continuing his footballing education at the Academy of Football.

“I know a lot about West Ham because it is a very big club in England and helps young players get to the first team,” he said. “I want this and I'm working for this.” 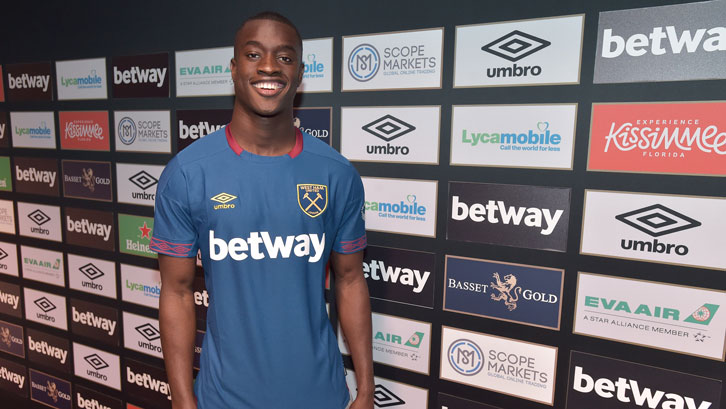 Academy Director Terry Westley confirmed Dju is a player West Ham have been scouting for a considerable period of time and the Club is delighted to have secured his services.

“We had seen Mesaque play for Portugal and win the U17 and U19 European Championship titles,” Westley explained. “He was an attacking player who was always highlighted when you watched him in those games.

“We always said that, should he become available, he would be of interest to us and due to our extensive networking and recruitment department, we found out that the opportunity had arisen to sign the player, so we stepped in quickly and secured his signature.

“Mesaque is a wide player who is different to the current young wide players we have in Grady Diangana, Nathan Holland, Martin Samuelsen and Dan Kemp, who are what you would class as a dribblers. He is a dynamic player with great pace and power, a little bit like Michail Antonio.

“He is six-foot plus, two-footed, strong and can deliver with quality from the left or the right, and could even develop in to a number nine with his attributes, which we believe could make him a Premier League player.”

Born in Guinea-Bissau, Dju moved to Portugal as a boy, joining Lisbon giants Benfica at the age of eleven in 2010. There, he was part of the squad which reached the 2017 UEFA Youth League final and were crowned Portuguese national U19 league champions for 2017/18.

Dju’s outstanding talents have also been recognised regularly at international level, with the teenager being capped by Portugal at every age group from U16 to U20, with huge success.

In 2016, he appeared in all six matches, starting five including all three knockout matches, as Portugal were crowned UEFA European U-17 Championship winners.

The following year, 2017, he was named in the UEFA European U-19 Championship Team of the Tournament as Portugal finished as runners-up to England. Last summer, he was again part of Portugal’s U19 squad as they defeated Italy to become champions of Europe.

Now a regular at U20 level, Dju will almost certainly appear at this summer’s FIFA U-20 World Cup in Poland.

He joins another promising Portuguese talent in east London in 21-year-old forward Xande Silva, who made his first-team debut in the Premier League at Burnley in December.

West Ham United would like to welcome Mesaque and his family to the Club and wish him every success for his career in Claret and Blue.