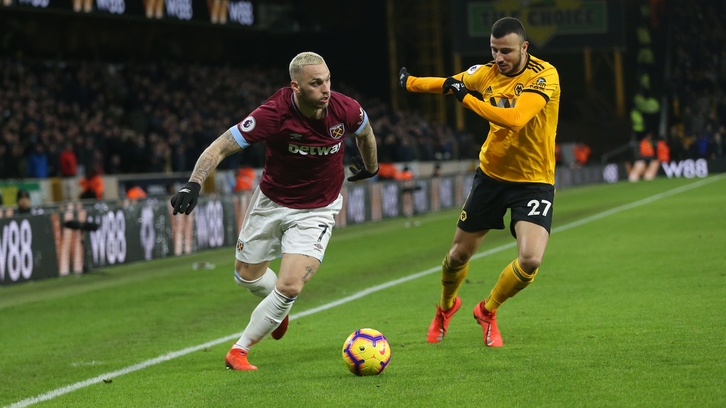 A trio of second half goals saw West Ham United fall to a 3-0 defeat at the hands of Wolverhampton Wanderers.

Romain Saiss powered home a header to give the home side the lead, before Raul Jimenez struck twice in the final ten minutes to secure the win for Wolves.

West Ham’s best move of the opening 45 minutes was their first. Mark Noble found Declan Rice before combining with Felipe Anderson. The Brazilian held, waiting for the run from Arthur Masuaku, finding the left-back in space inside the penalty area.

Masuaku took a touch but could only fire into the side netting.

Pablo Zabaleta came close to finding Marko Arnautovic in behind, with the Austrian just inches away from latching onto the ball, while Anderson dragged a shot wide from around 25 yards.

At the other end, Wolves grew into the game. The home side tested through Leander Dendoncker, who saw a header saved, while Jonny had a header go wide of the far post.

Wolves thought they were in front on 36 minutes as Dendoncker headed home, but the linesman’s flag was up, ruling that Raul Jimenez was offside in the build-up, having struck the post in the moments prior.

With Fabianski forced to make two big stops in the minutes prior to the half-time whistle, West Ham may have considered themselves fortunate to be level.

Wolves continued to apply pressure in the second period. Diogo Jota was on the end of a Joao Moutinho pass, seeing a powerful shot well saved by Fabianski.

The Poland international then made another sensational stop, denying Saiss, but the Wolves No27 would eventually get the better of Fabianski on 66 minutes.

It was no more than the home side deserved for their play, with Saiss getting in front of Angelo Ogbonna to power home a header.

The finish prompted a treble substitution for West Ham. On came Andy Carroll and Chicharito, but Wolves would go 2-0 up on 80 minutes.

Raul Jimenez’s goal would come from another Wolves set piece, with the striker stealing in front of Declan Rice to poke home.

The attacker would compile West Ham’s disappointing evening with his second, and Wolves’ third, not long after.