Hammers sent crashing out of the FA Cup 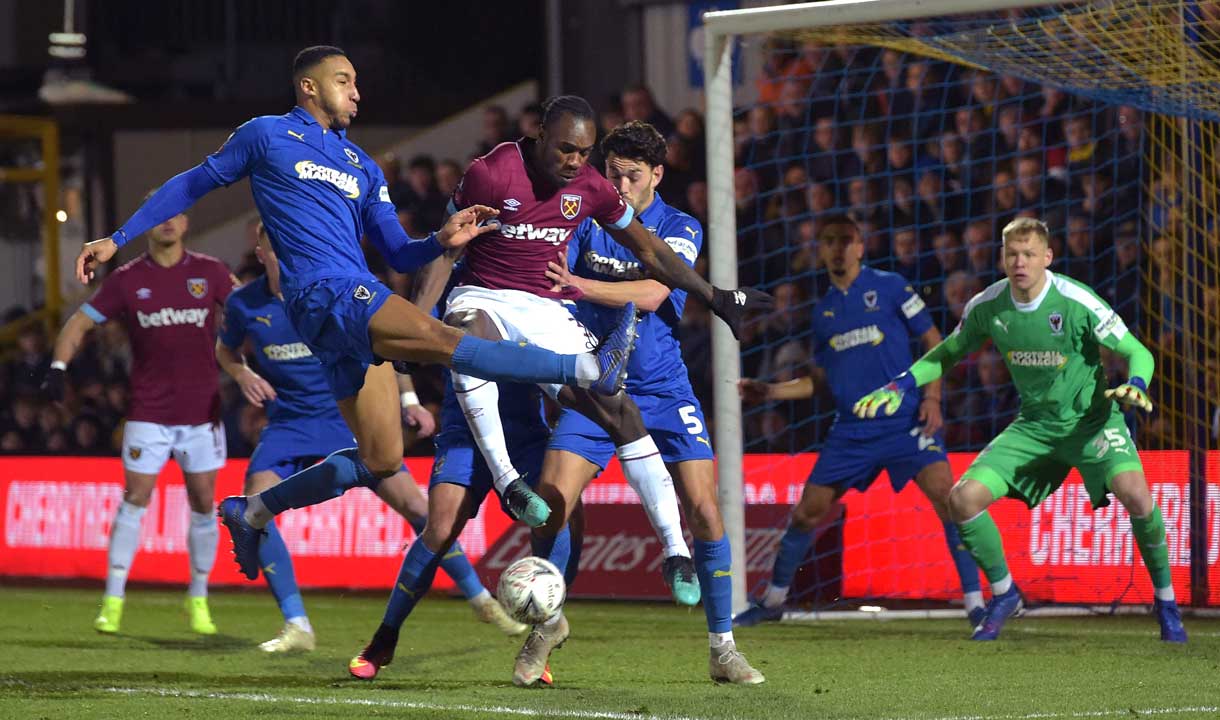 West Ham United crashed out of the Emirates FA Cup as they fell to a 4-2 defeat at AFC Wimbledon on Saturday evening.

The Hammers had an horrendous first 46 minutes of the game to blame for their exit, as two goals from Scott Wagstaff added to Kwesi Appiah’s opener to put the League One side into a scarcely-believable 3-0 lead.

West Ham did haul themselves back into the contest through half-time subs Lucas Perez and Felipe Anderson, but Wimbledon did not crumble in the face of Hammers pressure and regained their composure to add a fourth at the death.

There was no way back from that for a shell-shocked Hammers as they saw their FA Cup hopes come to an end for the 2018/19 campaign.

From the first whistle, Wimbledon’s desire was clear and they set about pressing the Hammers at pace to deny them the time and space to establish any dominance.

With five minutes on the clock, they threatened for the first time – and the source of the danger down the right hand side would be a constant one throughout the opening 45 minutes. Dylan Connolly delivered a low cross from the right, and Michail Antonio had to stretch to deal with it.

A minute later, Andy Carroll made a hash of a clearance following a corner, and the ball dropped for Terrell Thomas in front of goal, but he sliced the shot over.

Adrian had to fist clear a dangerous Mitch Pinnock free-kick from a tight angle as Wimbledon continued to create the better chances, although Chicharito might have done better when Robert Snodgrass played a pass to him down the side, and the Mexican’s shot was deflected behind.

Back came Wimbledon and Adrian had to be alert to stop Connolly’s sharp glancing header on 18 minutes.

West Ham could not say they hadn’t been warned by the time Appiah gave the Dons a 34th minute lead. Again it was sloppy on the Hammers’ part as they failed to keep possession after clearing a corner, allowing the home side to feed it back to Appiah on the edge of the area, and his shot took a deflection and found the net.

Seven minutes later it got worse for West Ham when Wagstaff robbed Obiang inside the visitors’ territory, allowing him to run clear on goal and slot past Adrian.

Manuel Pellegrini made a triple change at half-time, but within 40 seconds of the restart it was 3-0.

Wagstaff was the goalscorer, darting to the near post to meet Appiah’s cross with a prodded finish into the bottom right hand corner.

Having scored a third, Wimbledon perhaps naturally dropped a little deeper, allowing West Ham to play their football nearer the visitors’ goal and they took advantage by finally getting on the scoresheet with 57 minutes played.

It was two of the half-time subs who combined to score, Ryan Fredericks fizzing a low cross through to box and Lucas Perez firing the ball back across the keeper and into the bottom right corner.

With 19 minutes left to play, the deficit was reduced to one. Will Nightingale upended Snodgrass on the edge of the box as he moved infield, and Felipe Anderson stepped up to whip the free-kick inside Aaron Ramsdale’s near post.

Wimbledon were firmly on the back foot by now, but they settled their nerves and finished the tie two minutes from the end when they recycled a corner, allowing Anthony Wordsworth to deliver a cross for youngster Toby Sibbick to nod home at the far post.