Ogbonna: Everyone has to be ready to play at any time 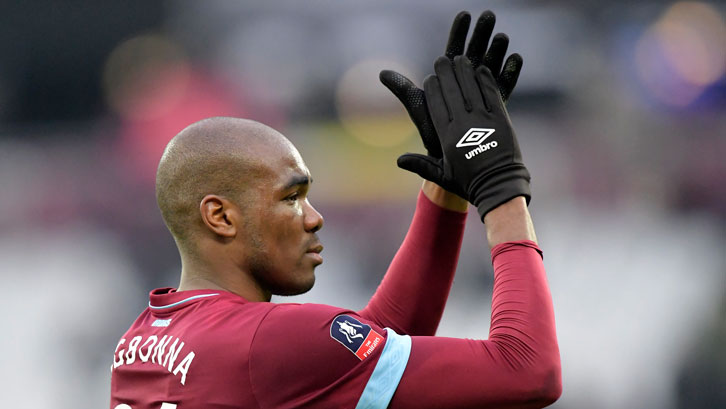 Angelo Ogbonna knows better than most the benefit of keeping yourself fit and ready to play whenever you are called upon.

The centre-back has been available all season long and whenever he has been named in Manuel Pellegrini’s starting XI, the experienced No21 has not let West Ham United down.

After kicking-off the campaign in the team, Ogbonna lost his place to Issa Diop, but returned in December when Fabian Balbuena was ruled out with a knee injury.

The 30-year-old has started each of the Hammers’ last seven matches and is set to feature again in Saturday’s Emirates FA Cup third-round tie at AFC Wimbledon.

“To be fair, we had a lot of matches in the space of a few days, so that’s why you can’t just relax.

“Some people don’t understand that it is difficult when a player has to come back to play after a long time out of the team, but this is our job and we do not complain. At the moment, for me, it’s good and I’m proud because I’m doing what I love.”

As individual players and as a squad, I think our expectation are a bit higher and we need to step up

Ogbonna helped West Ham to wins over Cardiff City, Southampton, Arsenal and Birmingham City in recent weeks, but also suffered the disappointment of defeats at the hands of Watford, Burnley and AFC Bournemouth – all three when victory would have taken the Irons up to seventh in the Premier League table.

As a player who won back-to-back Serie A titles during his time with previous club Juventus, he says Pellegrini’s side need to go up a gear if they are to challenge for a top-seven finish.

“We need to find the next level of performance and consistency now because we are not happy, to be fair, even though we won a lot of games since the start of December,” he continued.

“As individual players and as a squad, I think our expectation are a bit higher and we need to step up.”

Three players who have already stepped up this season have been Ogbonna’s current central defensive partner Issa Diop and 20-year-olds Declan Rice and Grady Diangana.

As one of the Club’s senior professionals, with more than 350 senior appearances and 13 international caps to his name, the Cassino-born star is in a good position to judge the promising trio - and he believes all three have what it takes to go to the top of the game.

“When I see lads like Issa, Declan and Grady, they are so humble and are trying to do their best. They remind me of when I was young.

“I am so proud of them because they have a lot of quality and they already know their position, that they are professional footballers, and they respect their teammates and everything about football.

“Those three players have great futures ahead of them.”