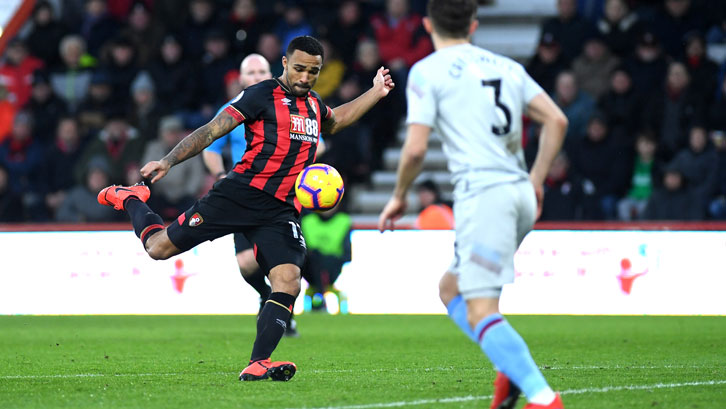 West Ham United missed the opportunity to go seventh in the Premier League table for the third time in a month by losing 2-0 at AFC Bournemouth on Saturday.

West Ham had plenty of the ball, enjoying 61 per cent possession and attempting 584 passes to Bournemouth’s 362 over the course of the whole game, but they turned that superiority into just one shot on target – a 25-yard effort from Chicharito that was comfortably gathered by Artur Boruc.

By that time, Bournemouth had already taken the lead through Callum Wilson’s outstanding strike nine minutes after half-time, and it was arguably the quality of the England striker’s finishing that was the difference between the two sides.

Moments before Wilson’s rocket into the top left-hand corner, the Hammers had created and missed their best chance of the game, with Andy Carroll lifting the ball over the crossbar from close range after he and Michail Antonio had initially battled and won possession inside the Cherries penalty area.

Bournemouth then did what they have done so well since winning promotion to the Premier League in 2015 – namely, counter attacking at lightning speed and in numbers and catching their opponents out of position.

Ryan Fraser got clear down the left flank, pulling Issa Diop away from the centre. The Frenchman made up the ground and got a block of sorts on the Scotland winger’s cross, only for the ball to loop and bounce up perfectly for Wilson, whose shot flashed past Angelo Ogbonna and a helpless Lukasz Fabianski and into the West Ham net.

The same could be said of Bournemouth’s second goal, scored in the first minute of added time.

With the Hammers throwing men forward in search of a late equaliser, former West Ham winger Junior Stanislas collected the ball in space wide on the left before threading a through ball to the impressive David Brooks.

The young Welshman could have taken the chance himself, but instead showed good awareness to pick out the unmarked Joshua King to his left and the Norwegian could not miss from ten yards out.

Both goals were perfect illustrations of the way Bournemouth have played since Eddie Howe took charge, with intensity, positivity and the purpose of overwhelming their opponents after turning over the ball.

At the other end, West Ham probed patiently and had plenty of possession in the Bournemouth half but, without the combined creative powers of the injured Manuel Lanzini, Jack Wilshere and Andriy Yarmolenko and, with Samir Nasri substituted, they just did not create the clear-cut chances they needed to regularly test Boruc and his defenders.

Therefore, news that Lanzini and Wilshere are getting closer to returning to first team training, and of Nasri getting fitter and stronger with every game he plays after a year-long absence from competitive football will both be music to the ears of West Ham supporters.

With more players on the pitch capable of creating high-quality opportunities, the chances are that, in the future, the Hammers will take more of them.