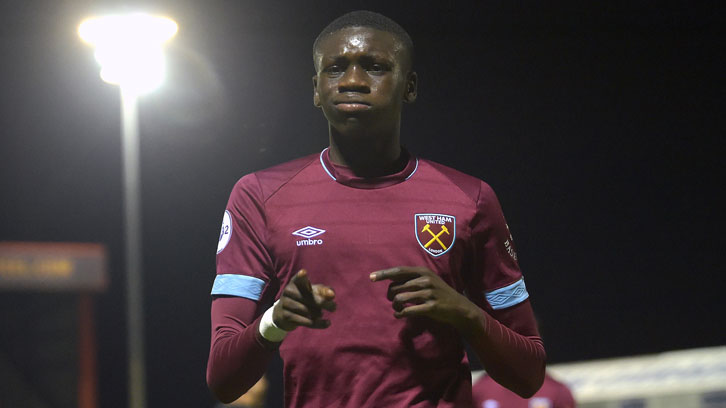 West Ham United’s youngsters made it back-to-back U18 Premier League South wins with a 2-0 victory over Swansea City at Little Heath on Saturday.

Emmanuel Longelo (pictured) and Veron Parkes were the youngsters who got the goals to secure three points for Mark Phillips' young and relatively inexperienced side, following a fine 4-1 home win over Norwich City a week previously.

Longelo converted from Jake Giddings' pass on 18 minutes to open the scoring before the in-form Parkes made the game safe by scoring the second eleven minutes from the end.

A seventh win of the season did not come easy for the Irons, who lost two players to illness an hour before kick-off and had a number of first-year scholars and schoolboys away with Jack Collison at an U17 tournament in Germany.

Phillips handed debuts to schoolboys Benicio Boaitey and Iyiola Adebayo from the bench, while outstanding 15-year-old Amadou Diallo started on the left wing and fellow U16 Jamal Baptiste put in another strong performance at centre-back.

The young Hammers will look to make it three wins in a row when they return to action at Fulham on Saturday 2 February.