On This Day: West Ham hit Aldershot for six in 1991

Taking a look back at a classic West Ham United moment on this day in history, in association with Basset & Gold.

An FA Cup replay on this day in 1991 brought plenty for the Boleyn Ground crowd to cheer, as the Hammers made up for a 0-0 draw against Fourth Division Aldershot by putting them to the sword at the second time of asking.

It was also the second time the tie had been played on the Hammers’ home turf, after the original match was switched from Aldershot’s Recreation Ground due to safety concerns, and this time the majority of the 21,484 in attendance went home happy.

West Ham did not have to wait long to open the scoring, George Parris finding Trevor Morley for the striker's 12th goal of the season inside ten minutes. 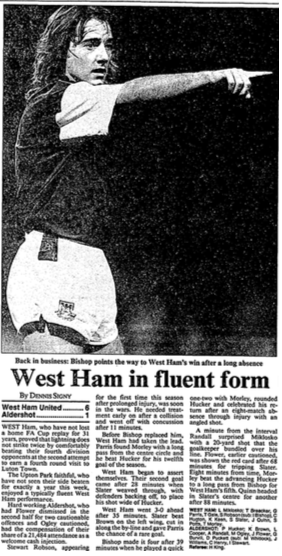 A weaving run and finish from Stuart Slater made it 2-0 on 28 minutes, before the winger turned provider for Parris seven minutes later.

West Ham added a fourth when Morley rounded the goalkeeper to slot home and there was still time for the visitors to pull one back through Adrian Randall before the break.

That was as good as it got for the visitors, as additional goals from Morley and Jimmy Quinn in the final ten minutes completed the scoring. West Ham would go onto reach the semi-finals that year, bowing out to Nottingham Forest at Villa Park.

The men who beat the Shots

Popular goalkeeper Ludo was a mainstay in the Hammers net in the 1990s, making over 300 league appearances for the Club. After a spell at QPR he retired in 2001 and later returned to West Ham as goalkeeping coach. He now represents up-and-coming Czech footballers.

Full-back Tim’s career was split largely between Luton Town – where he played 210 league games – and the Hammers, where he added a further 240 to the tally. Like Miklosko, he finished his playing days at Loftus Road and is currently chief scout at Bolton Wanderers.

Two-time Hammer of the Year Steve Potts played all but 21 of his 420 league games as a professional in West Ham colours. He played for the Club from 1985 to 2002 and, after training as a Black Cab driver, returned to West Ham to take up a coaching role in the Academy.

Westminster-born Tony started his career with Fulham before moving across town to begin a decade-long association with the Hammers in 1984. After leaving West Ham he won a Premier League title at Blackburn Rovers and is now a regular in commentary boxes around the country.

Republic of Ireland international Chris was nearing the end of his playing career  when he joined the Hammers from Tottenham Hotspur in 1990. He remained in east London for two years before signing for Brentford and then forging a successful career as a manager. He is currently in the dugout at Brighton.

Kevin was a regular in the Hammers side throughout the late 1980s and early 1990s and twice won promotion to the top flight with the Club. A season with Wolves in 1993/94 followed and he later turned out for Stoke and Macclesfield before embarking on a coaching career, which took in nine years at the Boleyn Groud. 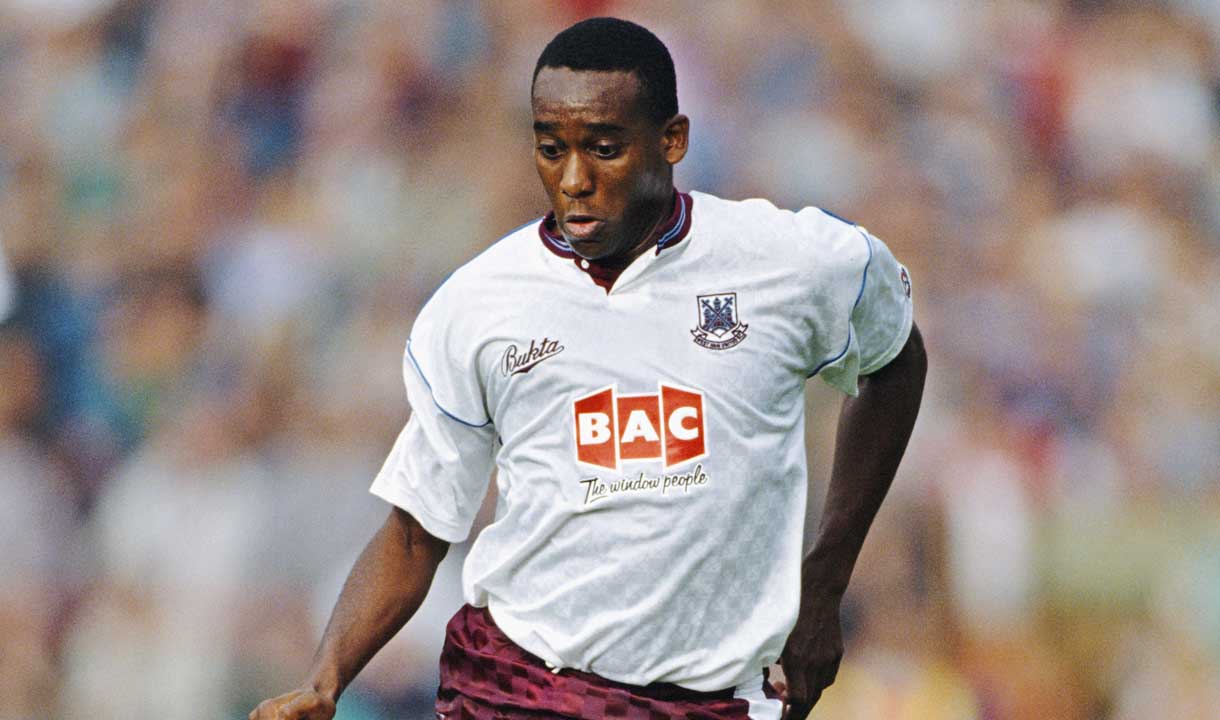 George wasn’t known for his goalscoring, but he notched the first of three goals in the Hammers’ cup run of 1990/91 in this replay. The east Londoner spent eleven years in Claret and Blue and had stints with Birmingham, IFK Norrkoping, Brighton & Hove Albion and Southend United in the latter part of his career.

Stewart was making his first appearance of the season following injury when the Hammers took on Aldershot, but he was unfortunate to pick up a concussion and was forced off within eleven minutes. He started off at Arsenal and ended at Coventry and is currently working as a pundit on TV.

Tricky winger Stuart came through the Academy ranks at the Hammers and he famously scored against Everton in the quarter-finals later in that year’s FA Cup run. Spells at the likes of Celtic, Ipswich Town and Watford followed and he now works as a coach in the academy at Chelmsford City.

Northern Ireland international Jimmy Quinn scored 22 goals in 57 games for the Hammers before having prolific spells at teams such as Bournemouth and Reading. He then managed a number of sides, winning promotion to the Football League during his time at tonight’s visitors Shrewsbury. 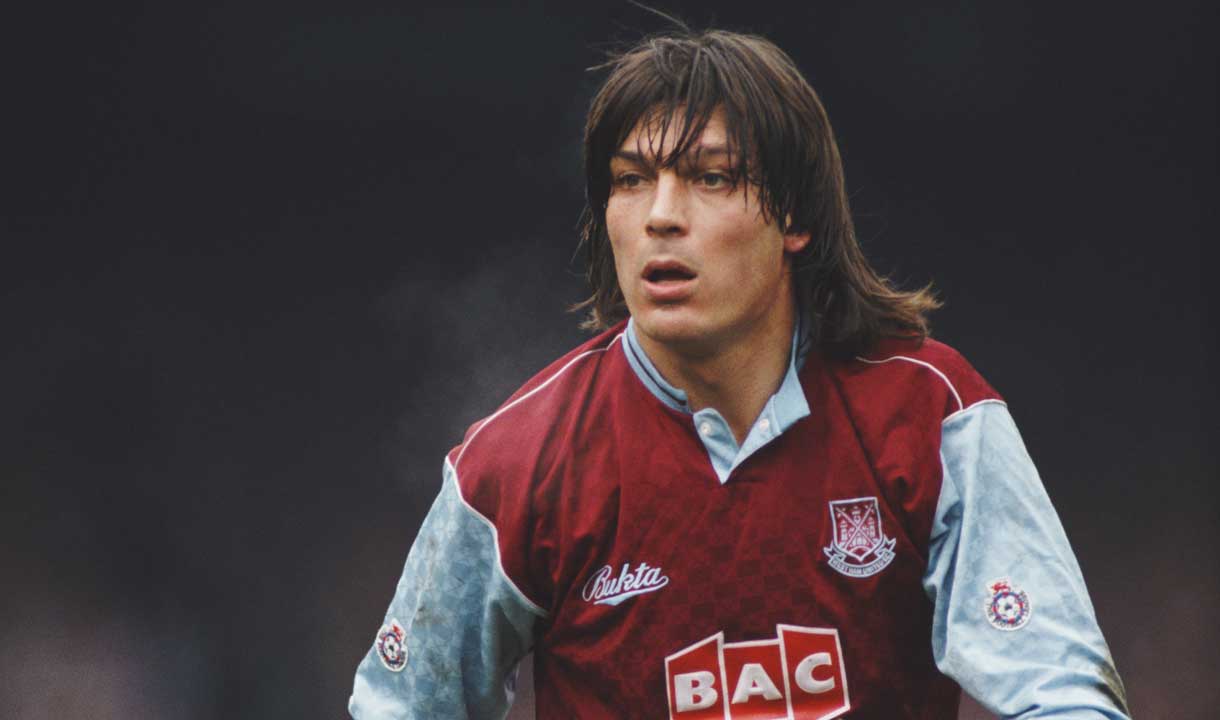 Trevor had six successful years in Claret and Blue, scoring 17 goals in 1990/91 – including four in the FA Cup. He went on to play for Reading and Norwegian sides Brann and Sogndal. Morley settled in Norway, where he works as a pundit for TV2 and runs a shelter for addicts.

Like Morley, Ian signed for the Hammers from Manchester City and went on to have a fruitful time in Claret and Blue. He returned to Maine Road in 1998 and ended his career in the United States, where he still lives today. He currently works as Technical Director for Evergreen FC in Leesburg, Virginia.