Manning: Spurs struggled to cope with us 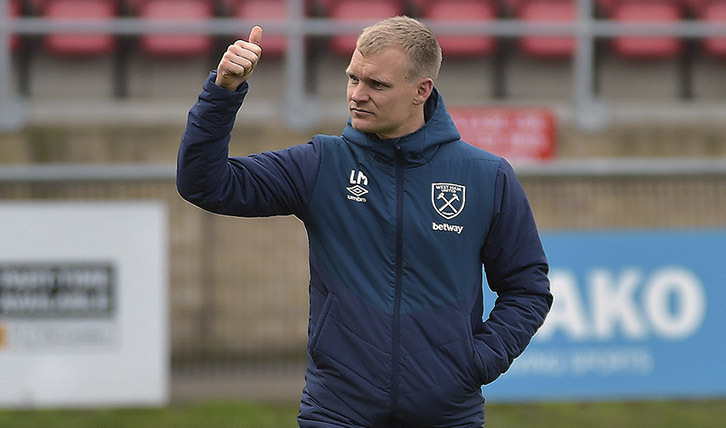 Liam Manning believes his West Ham United U23s were unlucky to come out of Sunday’s London derby against Tottenham Hotspur with just a point in Premier League 2 after a 1-1 draw.

The Academy coach watched his team take the lead through Joe Powell’s penalty at Dagenham and Redbridge’s Chigwell Construction Stadium, but Spurs hit back and equalised through Vincent Janssen.

The visitors then missed their own opportunity to score from the spot when Joseph Anang saved Kazaiah Sterling’s penalty kick but West Ham continued to create good chances and were unfortunate to go into the break level.

In the second period, neither side dominated but Jahmal Hector-Ingram twice went close and Manning was happy with his team’s performance.

He said: “I’m really, really pleased with how we played first half. I thought we, out of possession, worked extremely hard and put them under a lot of pressure and they struggled to cope with that.

“We had a lot of success, and maybe could have had some more quality around the penalty box but we created some really good chances and should have come in 3-1 up.

“Second half was very scrappy to be fair, but we showed a different side to us in terms of resilience, grit and how we collectively worked as a team.

It was a slightly frustrating draw but ultimately, we’re really pleased with how the boys did.

“The conditions were difficult. The strong wind was against us second half and the pitch was difficult at times, especially when trying to move it quickly. That contributed. But we got into some dangerous areas, Jahmal had some good chances, those two in quick succession.

“And with set-pieces too, if there was a little more quality on the delivery and attacking it we could have had more goals. It was a slightly frustrating draw but ultimately, we’re really pleased with how the boys did.”

Powell stepped up early on to bag his seventh of the season after Hector-Ingram had been fouled in the 18-yard-box, and the coach praised the young duo, whose combination in winning and scoring penalties this season has been vital.

“Jamhal was a handful,” Manning continued. “The number of penalties he wins is huge. It’s a huge asset to any team – he gets you almost double figures of penalties every season.

“With Powelly stepping up, you fancy him every time and he’s got a great technique stepping up to those. Then, at the other end, it was a really good save from Joseph. I thought he did well and he’ll be pleased with that.

“It’s a good start to the year for us. Obviously ideally with where we are in the league we’d have won today but we now have time to work as we don’t have a game until February.

“It’s not ideal and we’ll play a few friendlies to keep things ticking over, but we’re unbeaten and we’ll try to continue that for as long as possible.”