“I knew where he was going!” says Anang after penalty save 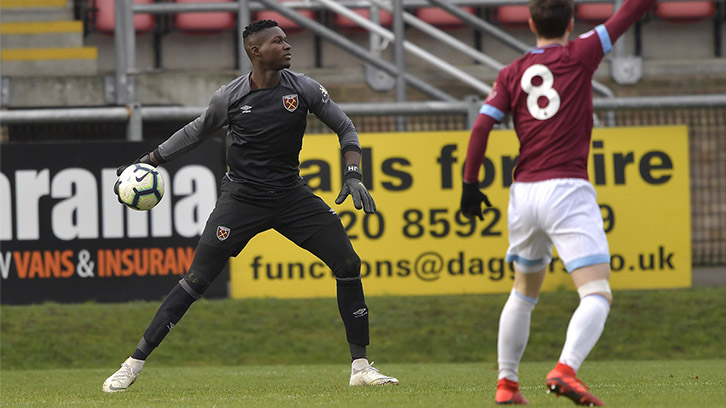 Joseph Anang says he knew where Tottenham Hotspur forward Kazaiah Sterling was going to put his penalty during West Ham United U23s’ 1-1 draw with their London rivals on Sunday.

The Hammers goalkeeper dived low to his left to keep out the forward’s spot-kick just moments after the visitors had equalised through Vincent Janssen following Joe Powell’s successfully converted penalty for the hosts.

The 18-year-old was solid throughout the stalemate, denying Janssen twice on other occasions and was always confident of denying Sterling when the No10 stepped up to the penalty spot.

He said: “I always thought he was going to go to my left. When we gave away the penalty, the first thing the taker did was look to my left. So he put the ball down on the spot and I knew that I was going to my left, no matter what. Luckily for me, I went there and made the save!

“You have to read what the taker is doing but also if you get any clues you have to stick to them and guess and stick to your instinct. I saw him look to my left so I was not going to change my mind after that and it was a good save.

“The eyes are the most important thing! Normally they will look at the spot at some point.

When we gave away the penalty, the first thing the taker did was look to my left. I knew that I was going to my left, no matter what!

“It was good handling as well to hold onto it and not parry it. That’s what we work on every day so I was pleased with holding the ball.”

The draw was West Ham’s first in Premier League 2 this season, though it could have been more had they capitalised one more of a number of great opportunities throughout the game.

Jahmal Hector-Ingram in particular had a pair of terrific chances in the second period, though Anang was pleased with the result at full-time.

“I think the point was good for us,” he admitted. :It was a good game and both teams had chances – we probably had the best chances in the game. We could have won the game but we take the point and we will go again.

“That’s the game; you score some, you miss some. That’s what happens and we just have to focus and look ahead to the next game.

“Janssen had a couple of shots but they were both straight at me so I didn’t have to do anything special to save them. They were simple saves.

“For me I want to keep learning, keeping playing U23 football and I can’t really complain. Having a run in the team is good for me so I am looking forward to the rest of the games this season.”