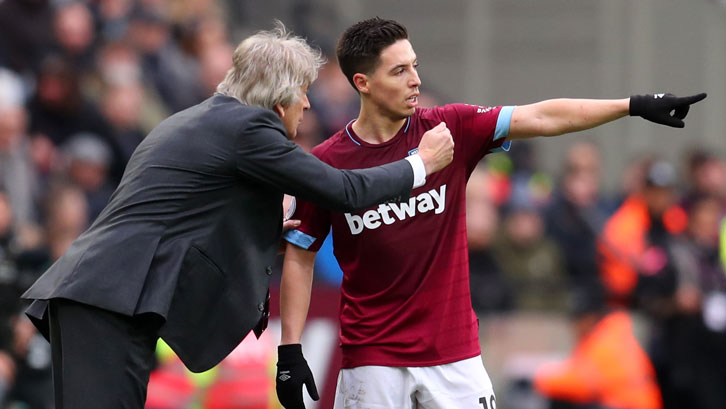 The Hammers set up in their usual 4-2-3-1 formation, enabling them to dominate the Gunners’ four-man midfield and pile pressure on their three centre-backs with a high-energy pressing game.

And Pellegrini’s decision to play with a high defensive line meant Arsenal could generally not get close enough to Lukasz Fabianski’s penalty area to find a way past their former goalkeeper.

With the back four also pushed up nearer to the halfway line to their own penalty area, the Irons did not give Unai Emery’s team any space to play their football in the attacking third.

As a result, with defensive-minded Granit Xhaka and Matteo Guendouzi outnumbered in midfield, the Gunners’ front three were isolated, save for the moments wing-backs Ainsley Maitland-Niles and Sead Kolasinac got forward to support them.

Things did better for Arsenal after Aaron Ramsey’s introduction as a second-half substitute, with the Welshman touching the ball just eight fewer times than Xhaka and making two key passes to the Switzerland international’s one in 26 fewer minutes on the pitch.

Arsenal out-passed West Ham 573 to 410 overall, with 520 of those 573 being classed as ‘short’, meaning they travelled less than 25 metres, but they just could not maintain sustained possession in dangerous areas.

Both teams had eleven goal attempts, but five of Arsenal’s came from outside the penalty area, compared to four from West Ham.

While they did force Fabianski into three saves to Leno’s two, the Gunners seldom seriously looked like getting past the Poland international. Twice, Arsenal had the ball in the net, but only after their players had run into offside positions behind West Ham's high defensive line.

Every match is different, of course, and, with his Arsenal masterclass now a fond memory, Pellegrini will now spend the week concocting a plan to take down AFC Bournemouth at the Vitality Stadium next weekend.

But first, the West Ham manager can congratulate himself on a job very well done.