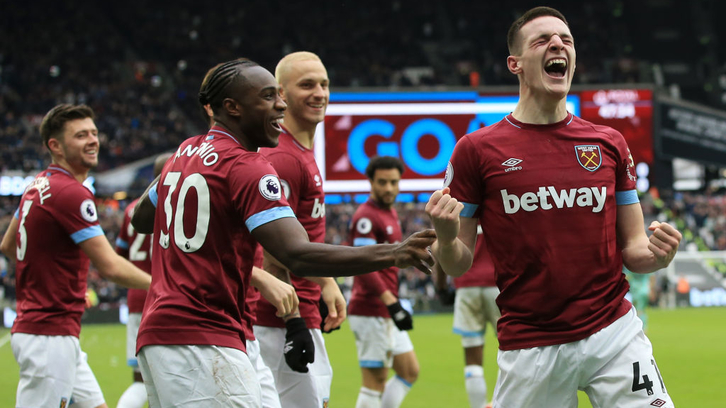 Declan Rice’s first West Ham United goal was enough for the Irons to secure a brilliant 1-0 victory over Arsenal in front of a record attendance at London Stadium.

The Academy graduate stuck on 47 minutes, bending home a wonderful finish worthy of winning any game from just inside the area, after receiving a pass into his path from Samir Nasri.

The No41 went close moments before the restart too, seeing a header just climb over the bar, while Felipe Anderson also went close for the home side.

Alex Iwobi looked close to levelling the game for Arsenal, but could not squeeze his shot home, meaning Rice’s exquisite finish was the difference, leaving the Claret and Blue supporters among the 59,946 attendees at London Stadium ecstatic.

A strong opening to the game for the Irons came from Michail Antonio. The No30 ran the length of the pitch to put the Hammers into a good position, before passing across to Mark Noble. The skipper exchanged passes with Samir Nasri, but couldn’t trouble Bernd Leno with his shot.

Felipe Anderson had his first attempt on goal after 11 minutes, receiving the ball from Aaron Cresswell before curling over the bar.

Lukasz Fabianski showed his talent once again just moments later, standing tall and saving after Alexandre Lacazette was put through on goal.

West Ham looked the greater threat, which continued to show throughout the first period. Nasri combined well with Marko Arnautovic, only for the Frenchman to hit the side netting, before the duo intertwined again to set up Anderson 20 yards out. The Brazilian’s shot was agonisingly close, scraping past the woodwork.

Declan Rice had a great opportunity to put West Ham ahead as the first half ticked to a close, but his free header from a corner bounced wide of the right post, in a let off for the Gunners.

If Rice should have done better with his first opportunity, he made no errors with his second.

Less than two minutes after the restart, the 19-year-old put the Irons in front in brilliant circumstances. Some excellent work from captain Noble saw the ball return to corner-kick taker Anderson. The Brazilian found Nasri, who registered his first West Ham assist by laying the ball off to Rice.

The No41 made no mistake. He curled an expert effort on goal from 15 yards. Leno had no chance as the ball nestled into the roof of the net.

Rice’s face showed the jubilation every West Ham fan felt in that moment as the Academy graduate was mobbed by his teammates. What a finish and there was no one more deserving of scoring in front of the record attendance at London Stadium.

Angelo Ogbonna looked to double West Ham’s advantage, but his header was over the crossbar, while Cresswell showed his maturity in shepherding Pierre-Emerick Aubameyang out wide, forcing the Arsenal striker to attempt his effort from a narrow angle.

Alex Iwobi had Arsenal’s best chance. The winger was played through after a clever flick by Aaron Ramsey, but his shot was across goal and wide. A let off for West Ham.

Even as the final moments ticked away, West Ham looked in control, with Manuel Pellegrini’s side even searching for the second to secure the result. Anderson and substitute Robert Snodgrass continued to drive the Hammers forward, while Andy Carroll’s strength kept the Arsenal defence occupied.

There was a collective held breath when Arsenal turned home in injury time, but referee Jonathan Moss had correctly spotted an offside in the build-up, and West Ham supporters roared in unison as the final whistle was blown.