Level-headed Rice taking it all in his stride 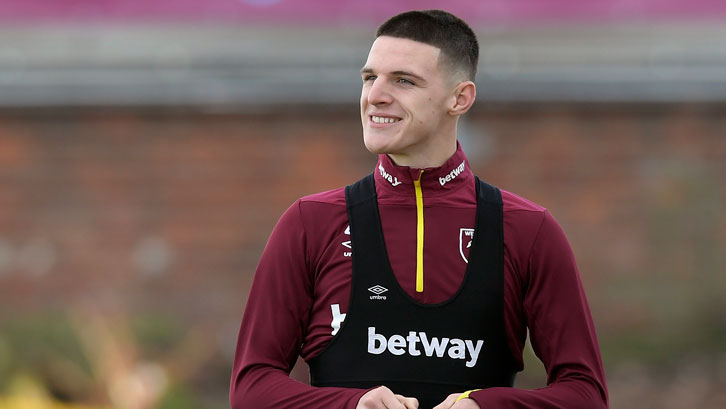 West Ham United will play Arsenal on Saturday in front of 60,000 supporters inside London Stadium and a worldwide television audience totalling tens of millions.

But, for Hammers star Declan Rice, the key to performing to his best will be treating a Premier League London derby like a kickaround down the local park with his friends.

Still just 19, Rice has shown maturity and ability beyond his years, chalking up more than 50 first-team appearances, shrugging off the disappointment of defeats and rare indifferent individual errors, and earning rave reviews from fans, pundits, his manager and teammates alike.

The youngster has taken it all in his stride, showing a strength of character that will undoubtedly stand him in good stead as his career progresses.

I go out there and try to play well. If I do, that’s good, move on to the next one. If I don’t, that’s football, so try to bounce back. That’s really how I see it

“I am excited by the prospect of Saturday’s game but, as I said to Mark Noble before the Liverpool game, ‘It’s just another game of football’,” he told the Evening Standard.

“Before every game I get a text from my Dad. It says, ‘Start quick, start well, win your first header, your first tackle’. I see it like playing with my mates. I know it’s the Premier League, but if you think too much about things, you get caught up in the occasion.

“I go out there and try to play well. If I do, that’s good, move on to the next one. If I don’t, that’s football, so try to bounce back. That’s really how I see it.”

Rice’s level-headed approach has seen him establish himself as one of the first names on Manuel Pellegrini’s teamsheet and earned him a new long-term contract, which he signed on 28 December.

Having committed his future to the club he joined at the age of 14, the teenager, who turns 20 on Monday, is now determined to enjoy success in a West Ham shirt.

“I want to play at the top level throughout my career,” he confirmed. “I want to win trophies, even the Champions League. You have to be ambitious. If not, what’s the point?”

Rice knows he still has a way to go to get to the highest level and emulate a player he has already drawn comparisons with – the late, great West Ham captain Bobby Moore, who won an FA Cup and European Cup Winners’ Cup during his illustrious career in Claret and Blue.

“I’ve seen comparisons between myself and Bobby Moore,” the No41 admitted. “It’s nice to be told there are similarities but nobody will come close to him — what a player, what a man!

“Just to be mentioned in the same breath as Bobby is something really special for me. I know I still have a lot to learn. If you’re not learning, you don’t progress.”