Collison: U18s are raring to return after Christmas break 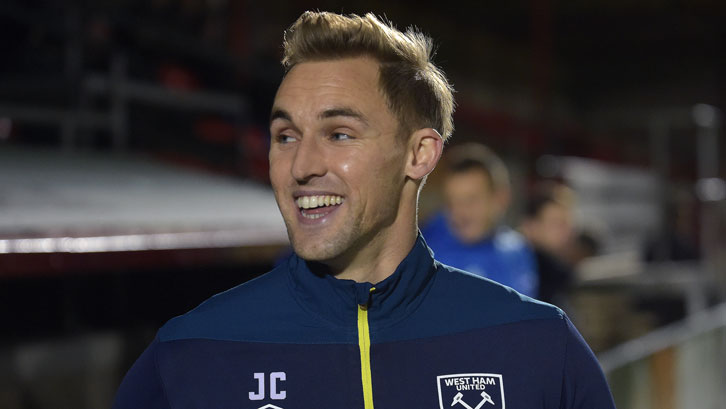 Jack Collison says West Ham United’s scholars and schoolboys are eager to return to U18 Premier League South action after the Christmas and New Year break.

The young Hammers have not played a competitive fixture since drawing with Brighton & Hove Albion on 15 December, with the players and staff being given a short period of time off to spend with their loved ones.

However, coach Collison said he and Mark Phillips were delighted to get back on the training pitch at Little Heath this week ahead of today’s league game at Southampton.

They’re all playing for something, whether it’s to get an Under-23 appearance, a new contract or try to impress a potential new club, so I’m sure they’ll all be raring to go

“When the boys are in is quite full-on, with their education, their gym work and their training and matches, so to be able to give them three or four days and others slightly longer breaks was beneficial. Hopefully, they will all come back refreshed and ready to attack the second half of the season.

“All the boys had nutritional and fitness programmes to take home with them and some were in training with the Under-23s, who have continued through most of the Christmas and New Year period to mirror the first team.

“So, there has been a lot going on and lots of individual programmes being followed. We came back in as a group on New Year’s Eve and will have a full week’s training leading into our first game of 2019 at Southampton.”

West Ham defeated Southampton 3-2 at home in the reverse fixture back in August, when the Irons kicked-off the season with four straight wins.

Emmanuel Longelo, Veron Parkes and Seb Nebyla were on target as the hosts came from behind and were later pegged back to 2-2 before Slovakian Nebyla’s late winner.

“Obviously, for us, we’re looking to start the New Year with a bang, with a nice performance and hopefully the right result.

“We know it’s going to be challenging because we played Southampton at home before Christmas and, despite us winning the game, they gave us a real good test and probably started better than us and we were quite lucky to go in level at half-time. We improved in the second half and our quality showed through and we managed to get the three points.

“We know it’s going to be tough as Southampton is never an easy place to go, but I’m sure the boys have all got itchy feet and cannot wait to get going in the second part of the season.

“They’re all playing for something, whether it’s to get an Under-23 appearance, a new contract or try to impress a potential new club, so I’m sure they’ll all be raring to go, as will the coaches and the staff.

“It’s obviously nice to have a little bit of time off, but we all begin to miss it after a couple of days and, speaking for myself, I had a couple of days at home and now I’m ready to get back and push the boys on.”