Manuel Pellegrini admits the manner of Brighton and Hove Albion's two goals against his West Ham United side was frustating, after his team battled back to claim a 2-2 draw.

Two finishes by Marko Arnautovic secured a share of the points for the Irons in Wednesday's match, who had to come from behind after Dale Stephens and Shane Duffy had put the away side ahead.

While Pellegrini was happy with his side's spirit in getting a point from a losing position, the Chilean was frustrated by how his team found themselves two goals behind, having specifically worked on defending against Brighton's corners.

We're frustrated because we knew before the game that the most important way that Brighton score goals is from set-pieces, specifically corners. After that, losing 2-0, I have to praise the spirit of the team.

"We're frustrated because we knew before the game that the most important way that Brighton score goals is from set-pieces, specifically corners," Pellegrini said "They had seven goals from corners and we worked on that, but we allowed them to score two goals. I do not remember one chance from Brighton to score otherwise during the whole game.

"But, we didn't have one chance in the first 45 minutes on goal. After that, losing 2-0, I have to praise the spirit of the team. We didn't give up, we continued to fight, and we draw the game 2-2, and after that we had clear chances."

It was two of Pellegrini's substitutes that changed the game for the Hammers in Michail Antonio and Mark Noble, with the midfield duo providing the two assists for Arnautovic's goals. 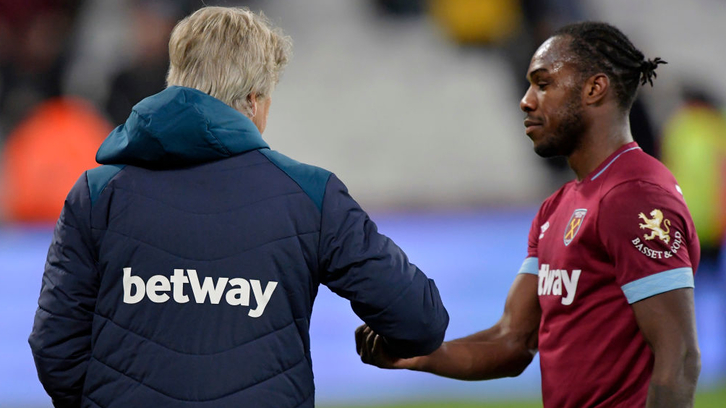 "I think both Noble and Antonio came into the game very well," Pellegrini continued. "They changed the face of the team. We needed to make changes. We have played nine games with our matches since December.

"We needed to make the substitutes becuase it's impossible to keep playing matches with the same players."

The boss was delighed with how Arnautovic was able to get West Ham back into Wednesday's match and is now targeting a good performance against Birmingham City to end the festive schdule.

"Marko rested for a complete month so he is full of energy. He is a decisive player in these types of games. He scored two goals and I hope he will continue in the way he did tonight.

"I think, fortunately for us, the spirit of the team was good after going 2-0 down. The strength was there to play better. Now we must try to qualify in the FA Cup against Birmigham, and then we recover for a week."