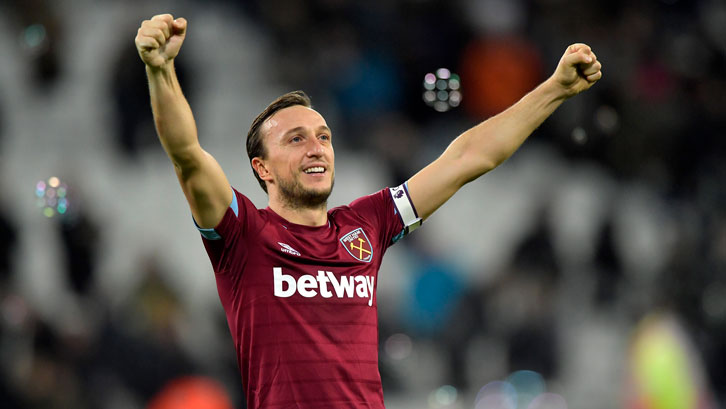 Mark Noble says West Ham United are determined to do exactly what they did last week by bouncing back from a defeat with a victory.

The Hammers responded from losing at home to Watford by winning at Southampton, only for the packed fixture list to catch up with them at Burnley three days later.

The jaded Irons were beaten 2-0 at Turf Moor, but captain Noble believes they have the quality to make history repeat itself when they host Brighton & Hove Albion at London Stadium on Wednesday evening.

We’ve got a good bunch of lads, so we look forward to going again against Brighton on Wednesday

“We’re used to it now,” he said, when asked about how players cope with the busy festive period. “It’s all part and parcel of it. We’ve had the New Year and now we go again.

“We were disappointed because we had a chance to go into seventh position and going into the New Year in that position, would have been really good after getting no points from the first four games.

“Even where we are now, we’re disappointed because we know we can play a lot better than that, but the travelling just caught up with us a little bit.

“It’s football. I’ve said in the past that we will get beat. We lost against Watford and we bounced back and showed our quality. We know we can do that again.

“You’ve got to put defeats to bed in this league because, if you dwell on it, you can get beat again. We’ve got a good bunch of lads, so we look forward to going again against Brighton on Wednesday.”

West Ham could welcome Pablo Zabaleta back from illness when they face the Seagulls, while new signing Samir Nasri could also come into contention, boosting a squad which has been depleted by injuries in recent weeks.

Reflecting on Sunday’s reverse at Burnley, Noble was not looking to make excuses, rightly praising Sean Dyche’s side for their performance, but fairly pointed to a draining post-Christmas schedule when explaining West Ham’s subpar performance.

“If I’m honest, I thought Burnley thoroughly deserved the three points,” he observed. “They played with a lot of intensity and we struggled to get going.

“We were much better in the second half, but it’s the Premier League and if you don’t match the other team then you’re likely to get beat, so I thought they deserved their win.

“I think it was one game too many. We’ve had two away games and didn’t get home until 2.30am after beating Southampton and then came straight up here on Saturday, so I think a bit of tiredness kicked in.

“We’ve had a fantastic run of games, so we can’t complain. Sometimes you have to give credit where it’s due and Burnley deserved the three points.”