Billy Bonds to be honoured at Saturday's game

West Ham United will honour club legend Billy Bonds at Saturday’s Premier League game against Newcastle United, following on from the announcement that the East Stand at London Stadium will permanently bear his name.

Home to a wall of over 20,000 supporters, the current East Stand will become the Billy Bonds Stand, in tribute to our record appearance holder and the man who twice lifted the FA Cup, in 1975 and 1980.

Bonds joins fellow Hammers greats Bobby Moore and Sir Trevor Brooking in being immortalised at the stadium, as the ultimate recognition for his many years of magnificent service to West Ham United.

The Billy Bonds Stand will be unveiled in a prestigious ceremony prior to kick-off next Saturday, with a number of pitchside events planned to mark the occasion from 5.10pm onwards.

The four-time Hammer of the Year will be in attendance for the visit of the Magpies, where he will be welcomed prior to kick-off by a guard of honour from his former teammates.

Supporters are urged to take their seats early, as Bonds will be interviewed pitchside by his fellow former Hammer Alvin Martin.

Martin will also be talking to two-time FA Cup winner Sir Trevor Brooking as he pays tribute to Bonds.

Then, as the teams enter the pitch, supporters in the Billy Bonds stand will be invited to display a mosaic bearing his name.

If you haven’t secured your seat for the Newcastle game yet, you don’t need to miss out as tickets are available for this sold out fixture on the Official Ticket Exchange. Head to eticketing.co.uk/whufc to check availability, but hurry as less than 200 seats currently remain on sale.

In addition, a DJ will entertain the crowd pre-match between 3.30pm-5pm at the Heineken Bar outside the Billy Bonds Stand, while a live band will perform there post-match.

Post-Match offers on a selection of draught beers will be available up to one hour after the match at the North Scoreboard Bar, Blocks 145, 137, 135, 129, 115 and at the catering units outside the Billy Bonds Stand.

So don't miss out on a day to remember as we honour the great Billy Bonds.

What you can find at our Stadium Store

There’s some fantastic savings to be had in the Club Shop, with up to 35% off both Home and Away shirts – all shirts and mini-kits are now just £35!

You will also have the chance to get your very own personalised West Ham poster from bethestarposters.com. The photography team will be downstairs in the Club Shop on Saturday, meaning you could be the West Ham star on your wall! 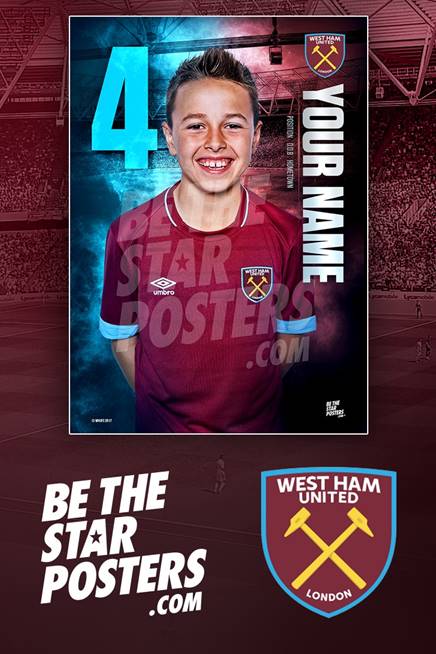 Newcastle - 2 March, 5.30pm: Click here to buy seats which have been relisted by Season Ticket Holders