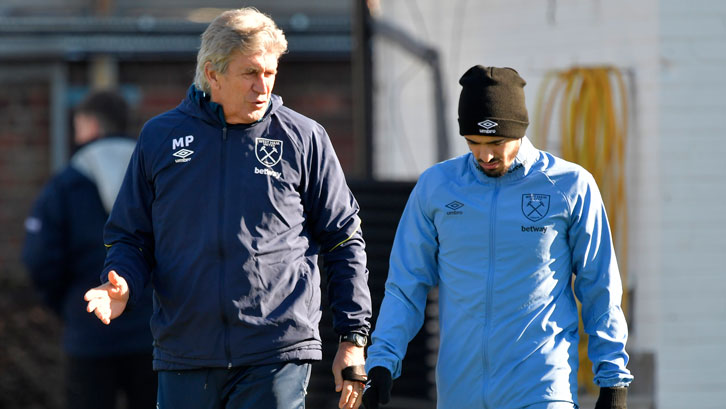 Manuel Lanzini could be set for an increased role when West Ham United head to Manchester City on Wednesday evening.

The Argentina playmaker made a successful return from injury in Friday’s 3-1 Premier League win over Fulham at London Stadium on Friday, when he looked sharp in a 15-minute appearance off the substitutes’ bench.

Manager Manuel Pellegrini was happy to see Lanzini come through his first competitive appearance since injuring his knee in the lead-up to last summer’s FIFA World Cup finals, and is hopeful of raising his number of minutes in upcoming matches.

Manu did very well in his 15 minutes and the important thing was that he was not afraid and remembering his knee, so we will see what the best way is to get minutes in every game

“We must be careful with [Manu],” said the boss, speaking in his pre-match press conference. “He did very well in his 15 minutes and the important thing was that he was not afraid and remembering his knee, so we will see what the best way is to get minutes in every game. You must be careful when you give more minutes. “

Lanzini is not the only creative player available to Pellegrini for Wednesday’s game, as former Manchester City midfielder Samir Nasri has also recovered from a calf injury and is available to face the club with whom he won the Premier League title under Pellegrini in 2013/14.

With Marko Arnautovic, Chicharito and Michail Antonio also fit, the manager is excited by his attacking options.

“In the way we can play together with Lanzini, with Samir Nasri, with Arnautovic, with Javier [Hernandez] and the good players that we have, I think we are going to be a stronger team,” he observed.

“Antonio is improving. This season he returned from a long injury, which is not easy, especially for a player so strong, to recover their best shape. Michail Antonio is working very hard every day and that demonstrates why he is improving his performance. He is a player who must continue improving."

The injury situation is also improving at the defensive end of the pitch, with Fabian Balbuena and Winston Reid both joining the first-team squad for their warm-up at Rush Green on Monday morning.

The Paraguayan has recovered from the knee injury he suffered in the home defeat by Watford on 22 December, while New Zealand international Reid is back on the pitch after suffering his own knee problem at Swansea City a year ago.

Neither will be available for Wednesday’s fixture, but are edging closer to making their respective returns to competitive action.

“[Our squad] is similar [from the Fulham match for Wednesday’s game],” the manager continued. “We don't have any new injuries, we have the same players available.

“Balbuena and Winston Reid have started doing parts of the sessions with us so that is good news for them.”