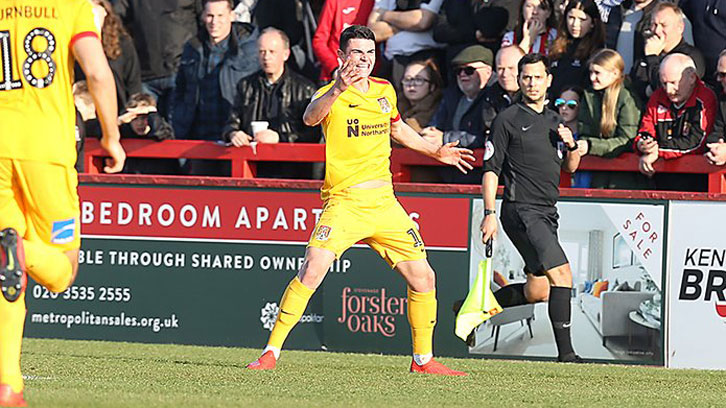 Joe Powell netted the first senior goal of his career to set Northampton Town on their way to a 2-1 win at Stevenage in EFL League Two.

The on-loan West Ham United midfielder put the Cobblers in front after 19 minutes at the Lamex Stadium, firing a low first-time shot past goalkeeper Paul Farman.

Stevenage, for whom Hammers loanee Moses Makasi played the opening 71 minutes in midfield, levelled through Alex Revell’s goal with eleven minutes to play, but Northampton were not to be denied all three points as Andy Williams scored the winner a minute into added time.

Powell was later voted Man of the Match by Northampton supporters and described scoring as an ‘unbelievable feeling’ in a twitter post.

Elsewhere, Josh Cullen also experienced the joy of a last-gasp winner as fifth-placed Charlton Athletic left it late to win 2-1 at AFC Wimbledon in League One.

Michael Folivi had put West Ham’s Emirates FA Cup conquerors into a first-half lead, before Mouhamadou Naby-Sarr levelled six minutes after the interval. Igor Vetokele then secured the victory for the promotion-chasing Addicks by heading home the winner in the first minute of added time.

Elsewhere, in Italy, Edimilson Fernandes was involved in a thrilling game as Fiorentina drew 3-3 with Inter Milan in Serie A. Fiorentina trailed 3-1 early in the second half, but fought back to snatch a point through Jordan Veretout’s penalty, which was converted in the tenth minute of added time, extending the club’s unbeaten run to nine matches in all competitions.

Reece Oxford endured a day to forget in Germany, where he was sent-off in the closing stages of Augsburg’s 5-1 Bundesliga defeat at Freiburg.

Augsburg were 3-0 down at half-time before pulling a goal back seven minutes into the second half. However, they conceded twice more in the final half-hour before Oxford was shown a red card in the first minute of added time for a foul on forward Janik Haberer. Oxford now faces a suspension and will miss Friday’s home match with leaders Borussia Dortmund.

In Spain, Toni Martinez played the full 90 minutes and was booked as Lugo drew 2-2 with Elche in the Segunda Division.

On Friday, Sead Haksabanovic provided the assist for Jordan Larsson to score IFK Norrkoping’s second goal in the Swedish club’s 2-0 Svenska Cupen Group B victory at Assyriska IK. A third win out of three at home to AFC Eskilstuna on Saturday will see Norrkoping through to the quarter-finals.

Finally, Marcus Browne was not involved as Oxford United won 1-0 at Blackpool in League One, nor was Vashon Neufville in Newport County’s 2-0 defeat at MK Dons in League Two.