Collison's delight as U18s rise to fourth in table 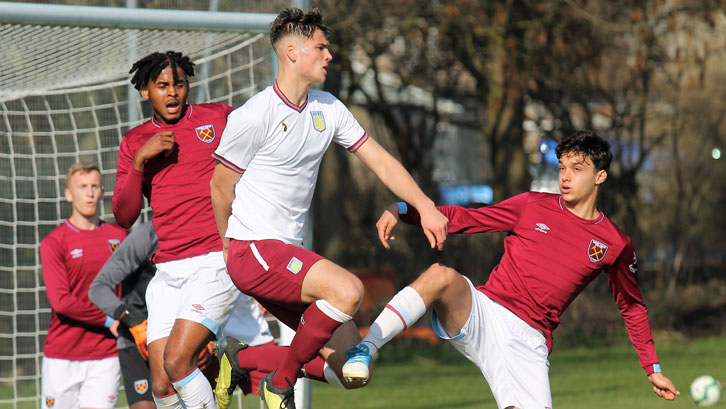 West Ham United’s scholars produced a fine performance to overcome Aston Villa and rise to fourth in the U18 Premier League South table.

The Hammers fell behind on a sunny Saturday afternoon at Little Heath, but goals from Reece Hannam, Louie Watson and Bernardo Rosa ensured Mark Phillips and Jack Collison’s team collected all three points.

A third victory in a row saw the Irons leapfrog their opponents ahead of Saturday’s trip to unbeaten Tottenham Hotspur, and coach Collison says the Hammers will head to north London in confident mood.

The boys took on the information we had given them about Villa before the game, plus our own tactical direction, and it all came together in what was a really good performance

“We went one-nil down but the real highlight of our performance was our attacking play, which resulted in three well-taken goals and a welcome result,” he said. “We had a lot of attacking players on the pitch, which meant we created a lot of chances, but it also put pressure on our defenders and goalkeepers to win their individual battles, which is exactly what they did.

“Reece Hannam and Louie Watson have both recently returned from long-term injuries, so we were delighted to see them both get on the scoresheet. That will have been great for their confidence, then Bernardo put the cherry on the icing on the cake with the third late on.

“Serine Sanneh in goal gave us his best performance of the season so far, not just with his saves, but with his bravery and his decision-making with his distribution in terms of when to go long and when to play out from the back. Peter Stroud is also a midfielder who did well filling in for us at right-back.

“We had a good week of preparation for the game and made a couple of slight tweaks to the formation and to get the best out of the players we had available and fortunately they paid off.

“The boys took on the information we had given them about Villa before the game, plus our own tactical direction, and it all came together in what was a really good performance.”

Next up for the young Hammers will be arguably their toughest test of the season so far, with free-scoring Tottenham welcoming their London rivals to Chigwell on Saturday morning.

Spurs have scored 56 goals in their 14 league matches at an average of four per game and rattled nine without reply past West Ham at Little Heath back in September.

Despite that, Collison believes the Hammers will give Tottenham a proper game this coming weekend.

“Tottenham will be tough, no doubt about it, and they’re not unbeaten for any other reason that they’re a really good side at this level,” he confirmed, “but we will put in the work on the training pitch and in the classroom this week and we will go there to give a good account of ourselves and, if we do, we can make it four wins in a row.”