Kiernan: A hat-trick and the quarter finals, what more could I want?

For Leanne Kiernan, Sunday's win over Huddersfield Town Ladies could not have gone much better.

The forward, having returned from injury, was named in the West Ham United starting XI and promptedly repaid Matt Beard's faith in her, scoring a hat-trick in the 8-1 win over the Terriers.

The result puts the Hammers into the quarter-finals of the SSE Women's FA Cup, and Kiernan could not have been happier with how the game went.

It was a great team performance today and we're into the quarter finals. What more could we want?

"I'm just delighted to be back playing football," Kiernan told West Ham TV. "It was a great team performance today and we're into the quarter finals. What more could we want?

"It's great to get on the score-sheet and get the hat-trick but it's about the team, at the end of the day. We all played well and I'm really happy."

Kiernan scored West Ham's last two of Sunday's game after the 80 minute mark, with four of the Irons' finishes coming in the second half.

The Ireland international feels the Hammers showed excellent character in keeping their foot on the pedal in the second period, having seemingly wrapped up the result in the first-half. 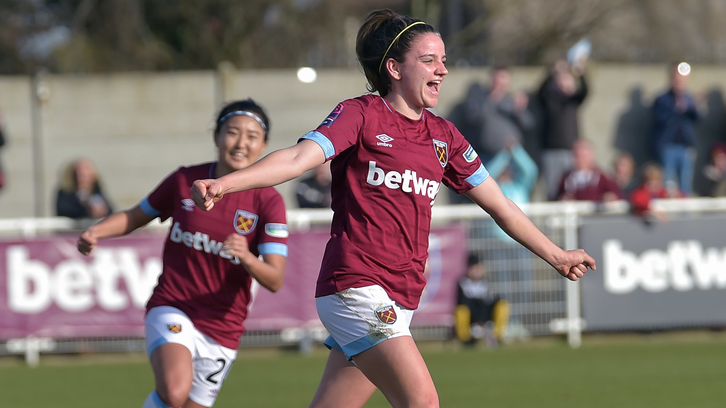 She continued: "Everyone has their difficulties but it's really good to get something out of today. We showed great team character in coming out and getting another four goals in the second half. It was really good."

With a quick turnaround needed for West Ham in the form of Wednesday's away match with Reading, Kiernan is confident the Irons can claim another big win.

Kiernan added: "We just need to keep our heads down, work hard on the training pitch, and hopefully we can get another good result."