Edimilson Fernandes scored a spectacular first goal for Fiorentina to secure his loan club a 1-1 Serie A draw at Udinese at the weekend.

Fernandes has enjoyed a good run in the Fiorentina team in recent weeks, helping the club to reach the Coppa Italia semi-finals with a 7-1 win over Roma last week and a four-match unbeaten run in Serie A.

In Germany, Reece Oxford appeared as a late substitute as Augsburg scored an important 3-0 win over Mainz, courtesy of a hat-trick scored by Alfred Finnbogason.

Oxford's debut came as a replacement for Jan Moravek as the Bavarians stayed 15th and moved onto 18 points, three clear of Stuttgart in the relegation play-off position and six ahead of Nurnberg in 17th.

In Spain, Toni Martinez started for Lugo, but was withdrawn 68 minutes into his team's 3-0 Segunda Division defeat at Numancia.

The result left Lugo 17th in the standings on 26 points, four ahead of Extremadura in the fourth relegation position. 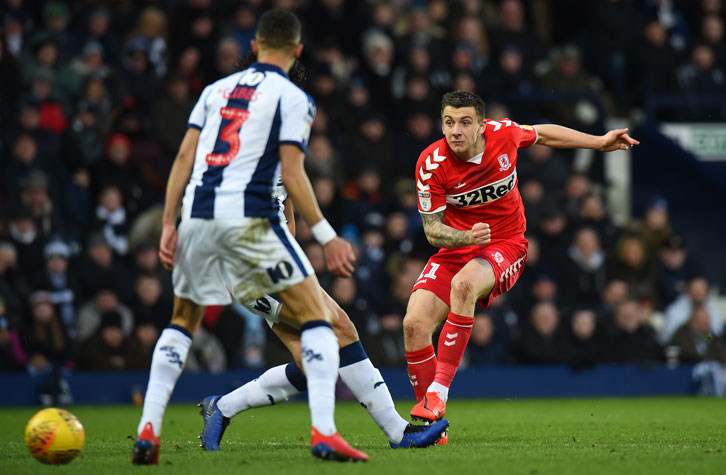 Leading the line in a 5-4-1 formation, Hugill assisted Britt Assombalonga's equaliser to make it 2-2 with 15 minutes remaining before the same player netted the winner with seven minutes to play.

Boro are fifth, seven points behind Leeds United in second, with an Emirates FA Cup fourth-round replay at Newport County to contest on Tuesday evening. A win at Rodney Parade will set up a last-16 clash with Manchester City at the Riverside Stadium.

That tie could also feature Newport's Vashon Neufville, who started at left-back in the Welsh club's 3-0 EFL League Two defeat at Grimsby Town on Saturday.

Moses Makasi had a happier day in League Two, where Stevenage scored a 1-0 home win over Yeovil Town to make it three victories in the last four games and rise to ninth in the table.

In League One, Josh Cullen played the whole game for Charlton Athletic, but the Addicks' automatic promotion hopes took a hit as they lost 1-0 at Fleetwood. Charlton are fifth, five points behind Barnsley in second.

Sead Haksabanovic set up the opening goal for Swedish club Norrkoping in their 4-1 pre-season Atlantic Cup win over Austrian opponents Mattersburg in Portugal. He was later withdrawn as a precaution after suffering a knock in a second-half challenge.

The winger had also scored his first goal for his new club on his home debut in a 3-1 friendly win over Elfsborg last Thursday. Norkopping face Portuguese club Farense on Wednesday afternoon in their next Atlantic Cup fixture.

Martin Samuelsen was an unused substitute as VVV-Venlo were thumped 6-0 at Ajax in the Dutch Eredivisie, while Marcus Browne missed Oxford United's goalless League One draw at Burton Albion through injury.