Leon: It was more important to win than for me to score

Adriana Leon was delighted to get her first goals for West Ham United in the 3-1 FA Cup win against Blackburn Rovers on Sunday, but was happier with the whole team’s performance and getting through to the next round of the cup.

The forward scored her first goal just before the half-time break. After originally scuffing her first shot, she made no mistake the second time round.

The Canada interational netted her second of the game after some great build up play, which sealed the victory for the Irons and sees them progress to the next round.

It’s always nice to get on the scoresheet, but more importantly I was just happy we got the win.

“It’s a very good feeling, especially because I thought the team played much better than we have in the last couple of weeks," Leon told West Ham TV.

“It was good that we really gelled out there, and we created some good opportunities. I think it could have been even bigger than a 3-1 win, but it was good to get the win and move on to the next round.

"It’s a nice feeling. It’s always nice to get on the scoresheet, but more importantly I was just happy we got the win and happy that we played really well together today."

Leon's first goal levelled the game for the Irons just prior to half-time, after Blackburn Rovers took the lead, and the No19 admitted her timely finish installed belief back into the Hammers. 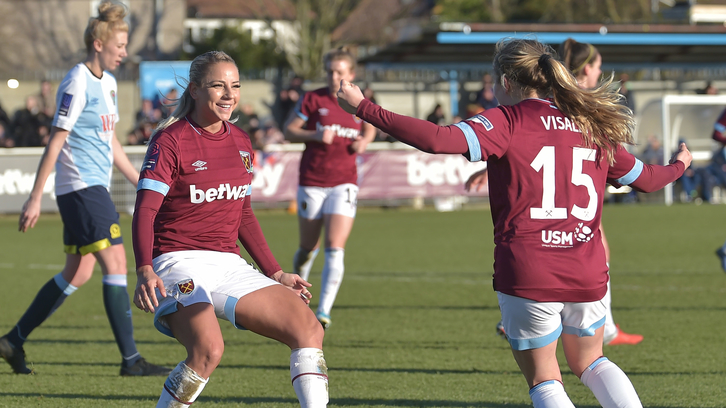 She added: “I think my first goa. brought a little bit of hope and belief back in to the group. it was great to see the team get back in the locker room and really bring it together, and we made sure we came out strong in the second half, which is what we did.”

After a difficult January, the Hammers are now hoping that this result can change their form and potentially see a good run in the FA Cup.

Leon said: “I think this win is a little confidence booster, especially with the way we played which was great. Our confidence is up a little bit and hopefully we’ll come out even stronger in the next game.

“A run in the cup would be nice, but we’ll see. I think anything is possible so long as we keep growing as a group and getting better game by game."