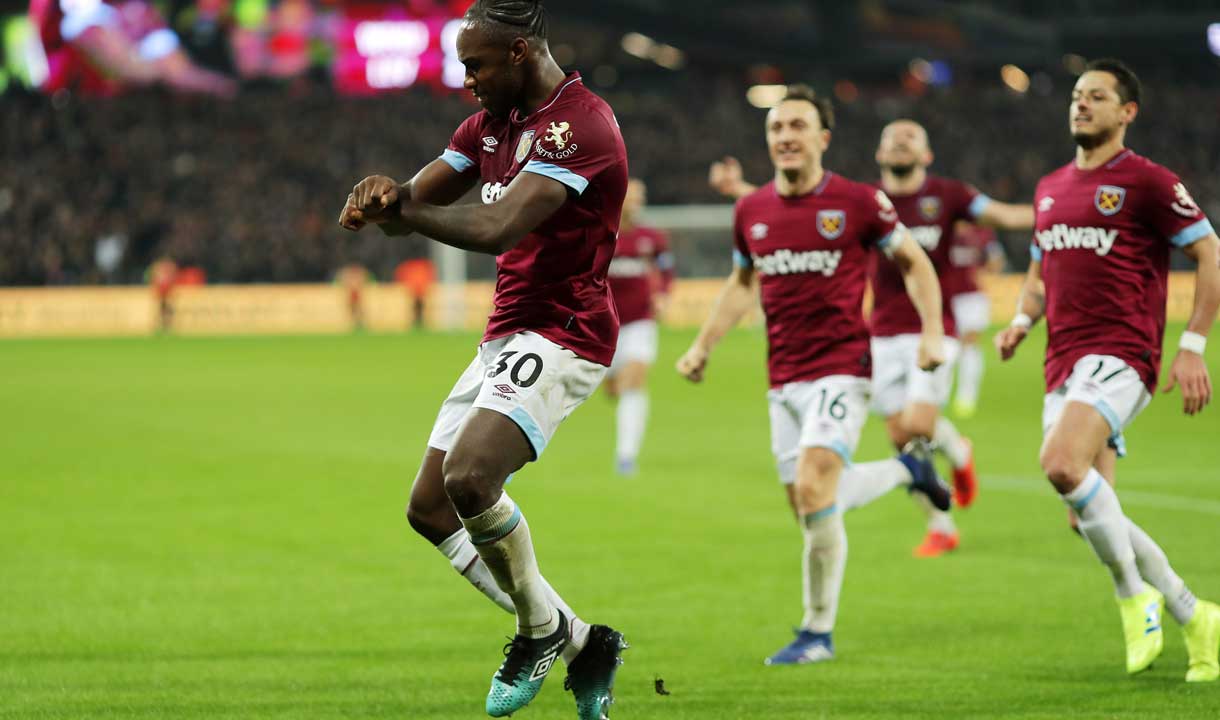 Michail Antonio scored yet another goal against Liverpool to earn the Hammers a hard-fought point at London Stadium on Monday night.

Antonio just loves playing the Reds – his 28th minute leveller here was his fifth in seven appearances against the Merseysiders in Claret & Blue.

His goal, converting a clever free-kick move started by Robert Snodgrass and Felipe Anderson, cancelled out Sadio Mane’s contentious opener and gave the east Londoners a share of the spoils their intense approach merited.

West Ham began with a greater bite to their play than they have shown in recent weeks and they almost gained their reward in the third minute when Chicharito found space in the box, but curled wide of the target.

Seven minutes later, Aaron Cresswell tried his luck with a crisp, low drive from 20 yards, with the ball fizzing not far past the far post.

Alisson was then called into action, diving to his right to push Chicharito’s long range effort aside as the Hammers continued to threaten.

With 20 minutes on the clock, West Ham had their first nervous moment of the evening as Roberto Firmino took advantage of a lucky ricochet in midfield to burst into the box. His shot lacked conviction, however, and Lukasz Fabianski saved comfortably.

The Hammers’ No1 was powerless to prevent the Reds from moving in front two minutes later though, when James Milner collected a pass from Adam Lallana on the right flank and crossed low for Mane to control, turn and stroke home. West Ham looked to have valid protests that Milner was in an offside position, but the linesman’s flag stayed down.

Justice was served within six minutes though, as the Hammers won a free kick midway inside Liverpool territory, and Antonio’s clever run down the side was perfect to collect Felipe Anderson’s pass and drill across Alisson and in via the far post.

West Ham’s intensity continued to cause issues for Liverpool before the break and Declan Rice was inches away from making it 2-1 when he was picked out by another Felipe Anderson free-kick, but he directed the header just over the bar.

The game retained its ebb-and-flow into the second period and Mohamed Salah showed great feet to glide into the area and leave Snodgrass and Rice in his wake on the hour, but Fabianski was equal to the shot.

At the other end, Mark Noble passed up a great chance to make it 2-1 in the 73rd minute, but he fired over the top when well placed inside the box after the ball bounced off Felipe Anderson’s chest and into his path.

Liverpool rarely looked like breaking the Hammers down as they searched for the goal they needed to maintain their five-point gap at the top of the table, and Manuel Pellegrini’s men took a well-earned draw.