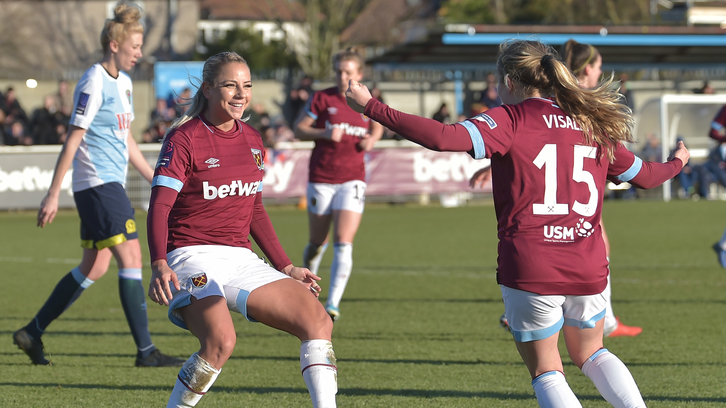 Two goals from Adriana Leon helped West Ham United progress to the next round of the FA Cup after a 3-1 win against Blackburn Rovers Ladies at Rush Green.

Natasha Flint opened the scoring for Blackburn on 14 minutes, but just before half-time Adriana Leon scored her first goal for the Irons to ensure they went in 1-1 at the break.

Then in the second half Brianna Visalli got herself on the score sheet, before Leon scored her second of the game to ensure the win.

Flint scored the first of the game after a mix up in the box allowed her to fire in to an empty net and give Rovers an early lead.

Minutes later Alisha Lehmann looked to bring the game level, but her header was straight at the keeper. On 27 minutes Erin Simon pulled off some great skill to beat two defenders only to see her shot go straight over the bar.

A minute before half-time Claire Rafferty put in a great corner, which found Lucienne Reichardt, but her shot was cleared off the line.

The Irons eventually got the game level on the stroke of half-time. Leon scuffed her first attempt at goal, but she made no mistake on the second attempt, meaning the Hammers went in to half-time level.

West Ham came out firing in the second half. Leon was first to have an attempt at goal but blazed it over the bar.

Lehmann could have put the Irons ahead on 53 minutes, as she was through one on one with Danielle Gibbons, but could only fire straight at the keeper.

10 minutes later, Kate Longhurst had a chance to get her name on the scoresheet. Ria Percival played in a great cross to Longhurst, but her shot went over the bar.

On 72 minutes Visalli put West Ham in front as she found herself open in the penalty area and looped the ball over Gibbons in the Blackburn goal.

Leon then sealed the game on 79 minutes. Some good link up play and a good cross in to the box reached Leon who put the ball away for her second and West Ham’s third of the game.