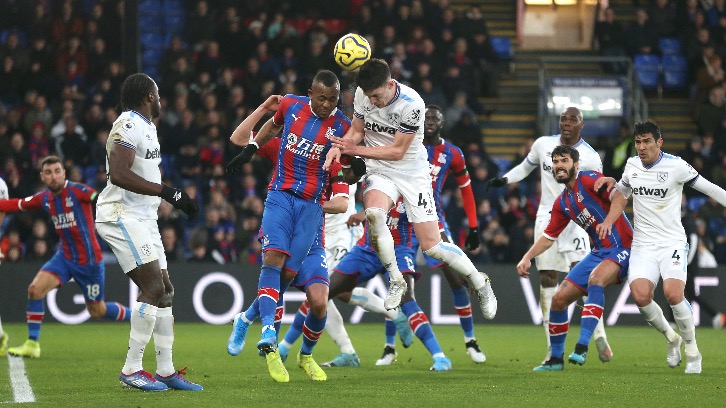 A late finish from Jordan Ayew broke West Ham United hearts as the Irons fell 2-1 away to Crystal Palace.

After a tepid first period, Robert Snodgrass grabbed the fourth league goal of his career against the Eagles with a superb strike, bending home following Michail Antonio’s excellent through pass.

However, Cheikhou Kouyate got Palace level against his former side, firing home a low effort after Ayew nodded back across the box.

The comeback was completed for the home side just moments before the 90 minute, as the Palace striker evaded a number of tackles before lofting the ball over Roberto.

Like the leftovers from Christmas dinner, Thursday’s Boxing Day meeting took a little while to warm up, with the first half-opportunity for West Ham falling on 20 minutes.

Three minutes later and Fornals had the ball in the Palace net, but the linesman’s flag was up long before the creative midfielder tucked home, with Tomkins once again denying the Hammer; this time by playing the high defensive line.

As the game ticked past half-an-hour, Crystal Palace wasted their best chance to take the lead. Wilfried Zaha did excellently on the left flank, skipping away from Noble and Pablo Zabaleta. The winger played a cross, finding Max Meyer, who returned the ball into the area.

Jordan Ayew met the pass, just five yards from goal and on his own. Somehow, the Ghanaian could only put his shot wide.

West Ham’s first shot on target came thanks to the industrious Antonio, who cut inside from the left and unleashed a powerful effort with ten minutes left of the first half. Vicente Guaita claimed at the second attempt, meaning the scores were still tied at zero apiece at the interval.

It was the home side that enjoyed the initial pressure in the second period, keeping West Ham’s defence alert as Ayew got past Aaron Cresswell and forced Roberto into a good save at his near post. Luka Milivojevic then tried his luck, bending just over from distance.

Having soaked up the pressure, West Ham took the lead out of almost nowhere. Antonio collected the ball about 30 yards, showed pace to beat his man and played an excellent through-ball into the feet of Snodgrass. The No11’s first-time shot was sumptuous, finding the far corner.

It would be former Hammer Kouyate who would level for the home side. Zaha’s crossed ball was nodded back across the box by Ayew, and the midfielder was able to sweep home from close range on the volley, levelling the score just 11 minutes after West Ham had taken the lead.

Returning duo Manuel Lanzini and Felipe Anderson entered the fray as West Ham went in search of their second, but it was a Palace substitute Connor Wickham who would go closest next. The striker, through on goal, decided to shoot rather than square to Zaha, but the outcoming Roberto was equal to the effort.

With less than five minutes remaining, A sustained period of West Ham pressure saw Cresswell played in on the wing. The left-back’s low ball looked destined to find Snodgrass, but a superb block denied the Scotsman from doubling his tally.

The devastating late blow came on 89 minutes. Ayew received the ball, tricked his way past Declan Rice, Angelo Ogbonna and Fabian Balbuena before lifting his effort into the back of the net, securing the three points for Roy Hodgson’s side.