Pellegrini: We must go for three points on the road

Having faith in your ability to win every game is crucial to picking up points on your travels, according to West Ham United manager Manuel Pellegrini.

As the Irons prepare to travel to the Midlands to take on high-flying Wolves on Wednesday evening, Pellegrini has stressed the importance of resisting the temptation to sit back in away fixtures.

Instead, West Ham’s Chilean manager advocates a positive mindset and a desire to play every game with as much intensity as possible – one aspect of Saturday's performance against Chelsea which paid dividends in a 1-0 win.

“[Starting quickly] is the first thing that I always say to the players you must do, especially when you are away,” Pellegrini explained.

“If you allow the home team to just play and you just defend, it will be more difficult to maintain your result, so you must be an aggressive team. I think that you must feel that you are coming for the three points. That’s what we did against Chelsea and we are going to do it tomorrow also.

“Of course it is so important to keep a clean sheet. At our best moment of this season we kept four [Premier League] clean sheets in a row.

“It’s so difficult to play always when you go one goal behind, because they have more space, so I think that one of the reasons why we played well was because the defenders were very concentrated and we defended every ball.” 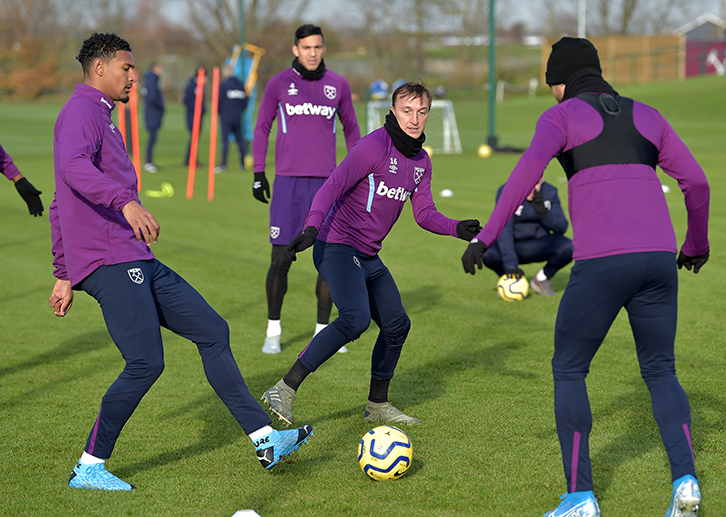 After witnessing several of his players become unavailable for selection for significant periods of time this campaign due to serious injury, the manager is now starting to see many of them return to full fitness.

Speaking at his pre-match press conference on Tuesday afternoon, Pellegrini clarified the statuses of a number of his first-team squad, including goalkeeper Lukasz Fabianski, defender Winston Reid and midfielder Manuel Lanzini.

“Lukasz is working in a normal way,” he said. “Probably he will be ready at the end of the month, but I think that we must be careful with his return and not try to bring him back before he’s absolutely ready. He’s training, not with the squad, but he’s training.

“Winston Reid played already 90 minutes so he is fit. Manuel Lanzini is running but he cannot have [physical] contact for around two or three weeks more, and all the other players are okay.”

Michail Antonio is coming back from a long injury, a surgery, so we must be very careful... we need to see tomorrow if it’s a risk for him to play again

Another player who has recovered from surgery earlier this season is forward Michail Antonio, who has played in the Hammers’ last two matches.

As with every rehabilitation from serious injury, Pellegrini stressed the importance of managing physical demands on the path back to full fitness.

“Michail Antonio is coming back from a long injury, a surgery, so we must be very careful about the way he plays,” he noted. “That’s why he played just 45 minutes against Tottenham and 70 minutes against Chelsea.

“We need to see tomorrow if it’s a risk for him to play again because the recovery between the two games is just three days, so we’ll decide with the medical staff what we’ll do with him, but we must be careful not to force him too much in these first games.

“I said after the Tottenham game that he was coming back from a long injury so he was mentally fresh. That’s the mentality that I think all the players must have during the whole season.

"He always makes an impact in the way he plays, and not just because he arrived in this moment. I think that last season he finished the season very well also.” 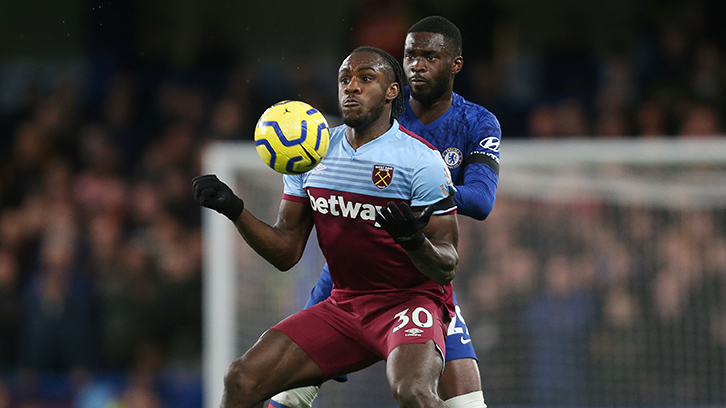 Saturday’s result marked the end of a difficult run of recent results for Pellegrini’s side, but the Chilean expressed his confidence that his squad can kick on from here, starting with a proactive display in Wednesday’s game with Wolves.

“In that sense I have never had any doubt,” he said.

“I think that the confidence of the players was not in the best moment, maybe their performances were not good, but when you have lived through those moments I think you must be more together than ever and play as a team, and all of us must take responsibility for why we didn’t get the results that we wanted.

“I always believe that we can do it. This Premier League is very tight. The difference between fifth position and 15th position has been three or four points, no more, so you must start every game believing you will have three points more. At the end of the season you will see where you arrive.”