Alvin Martin: It was an incredible feeling watching David's debut 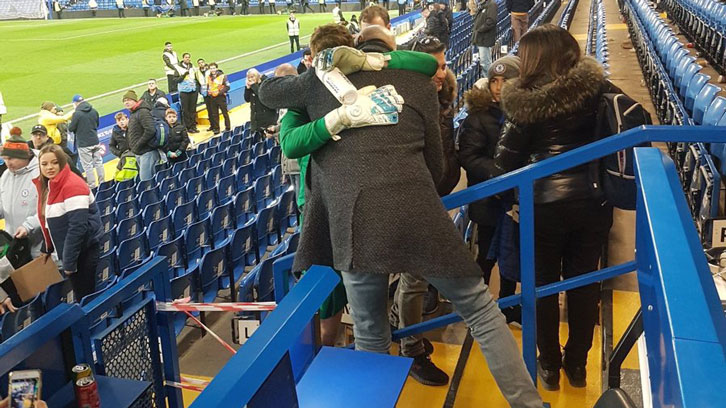 The legendary former Irons and England defender, 1980 FA Cup and 1981 Second Division winner, Boy of ’86 and three-time Hammer of the Year was in the crowd at Stamford Bridge as David kept a clean sheet to help his old club to a valuable 1-0 Premier League win over Chelsea.

After the final whistle, David broke down in tears before being helped to his feet by his jubilant teammates, celebrating with the Claret and Blue Army and finally climbing into the stands to embrace his proud father, who had taken the game in from the Press Box.

Speaking on talkSPORT, the radio station on which he appears as a regular pundit and co-commentator, Alvin said David’s debut was a moment the Martin family will never forget.

As a sportsman who played at the highest level, the highs that you get are unbelievable, but they are well down the pecking order when something like that happens with a child of yours

“I think the thing that struck me, going to the game, was how much it meant to him,” said the West Ham legend, now 61. “One of the press guys at West Ham, after he’d been there for about six weeks, said to me ‘I’ve never seen a player who is so excited about being here’ and that’s the truth, that’s not made up.

“I know he’s tough and I know he can handle things, but it meant a lot, so from that point of view, when he came up the stairs [to see me] and he knew he’d done it and it was over, he just didn’t want to let anyone down.”

David’s emotional debut and the high of helping his boyhood team win a big London derby came less than a year after arguably the lowest moment of his long career – a last-minute error in Millwall’s FA Cup quarter-final replay with Brighton & Hove Albion that cost the south London club a trip to Wembley.

For Alvin, watching his son recover from that disappointment to perform with such composure and confidence at the highest level was hugely gratifying.

“It’s an incredible feeling as a parent,” he confirmed. “As a sportsman who played at the highest level, the highs that you get are unbelievable, but they are well down the pecking order when something like that happens with a child of yours.

“You’ve seen him progress and go through ups and downs. I was on the radio a year ago doing an interview after David had made the biggest mistake of his career, and those four days were probably four of the hardest days I’ve ever had as a parent.

“To go from that to the other side of the spectrum and enjoy something so wonderful is just incredible.”