Pellegrini: The important thing was to get the win

Manuel Pellegrini insisted that claiming a first three points of the campaign was the most important aspect of West Ham United’s 3-1 victory at Watford.

Mark Noble’s early penalty and Sebastien Haller’s first two goals for the Hammers secured a thrilling win at Vicarage Road in a thoroughly entertaining match filled with chances for both sides.

Pellegrini believes the contest was a thrilling match for both sets of fans to enjoy, having told his players to expect an open encounter, and was happy for his team to play so well in the contest.

“It was a really entertaining game,” Pellegrini said. “Both teams played in an attacking way and tried always to score. It was an open game. I spoke with the players before the game and said it would be open. If Watford do what they normally do, then they will always play with six attacking players.

“Both teams, especially in the first 25 minutes, were very open in both boxes. I think the impact of Antonio in the second half made the difference.

“I always say, as a manager, the most important thing is to win. There are different ways to do that. I think maybe Watford fans will not be so happy, but both sets of fans came here and saw a good show, a good game of football for everyone, and those are the sort of games that bring more people to the stadiums.”

I always say, as a manager, the most important thing is to win. There are different ways to do that. Both sets of fans came here and saw a good show.

After Haller recovered from a knock to start and net a brace in this match, while Noble marked the 15th anniversary of his first showing in a West Ham shirt with a finish, Pellegrini reserved praise for both of his goalscorers.

He continued: “Mark is a very important player for us. Unfortunately for him, he had that calf injury and he needed three weeks to work. He returned and my first idea was not for us to play 90 minutes with him. I was asking him and he was telling me that he was okay.

“It was two very important goals for Haller too. It’s not easy when you come from another league and you start working here and playing here. It’s different between the leagues.

“He had just one start in the Premier League; a difficult game against Manchester City, and then he had a problem with his knee. He returned today because he worked during the whole week and I saw he was in perfect shape. For a striker, the most important thing is to score.” 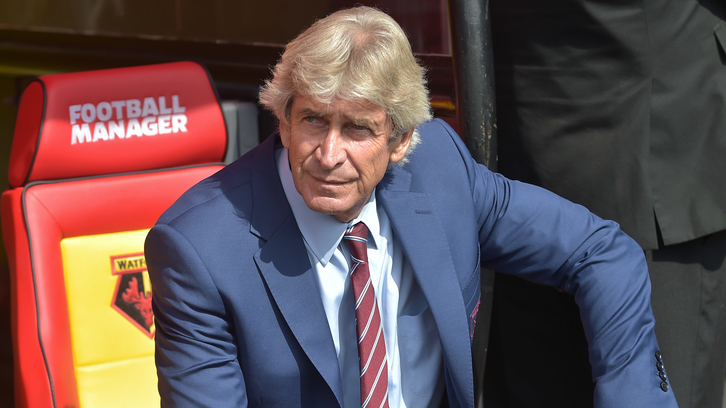 Having picked up a first win of the season, after a heavy home defeat to Manchester City and a draw with Brighton & Hove Albion, Pellegrini believes his preferred style of play and philosophy is taking shape in the West Ham United team.

With an away victory claimed, the Chilean is now hoping for a first home victory next Saturday, against Norwich City.

“It would be very easy for me, as a manager, to say after Manchester City to the players that we are going to play a different way and stay all back,” Pellegrini added. “I don’t think we would improve in that way. We did 45 minutes in a very good way against Manchester City. After that we made an important mistake that decided the score.

“We’ve worked exactly the same though and we’ve won away, and now I hope we can win at home against Norwich City on Sunday.”