West Ham United U23s will be looking to continue their winning start to the Premier League 2 Division 2 season when they travel to Newcastle United on Saturday.

The Irons got their campaign off to the perfect start by beating Fulham 3-0 at Chigwell Construction Stadium last Friday in what was an excellent team display.

Including pre-season matches, the U23s are unbeaten in four games under Head Coach Dmitri Halajko and the squad are full of confidence ahead of their long trip to Tyneside, captain Conor Coventry confirmed.

We wanted to bring our pre-season form into the league so obviously we were really happy to get the win.

“It was a great start,” said the Republic of Ireland U21 international. “We had a great pre-season and worked really hard and we didn’t want that to just stop there.

"We wanted to bring our pre-season form into the league so obviously we were really happy to get the win last week and also keep a clean-sheet as well.” 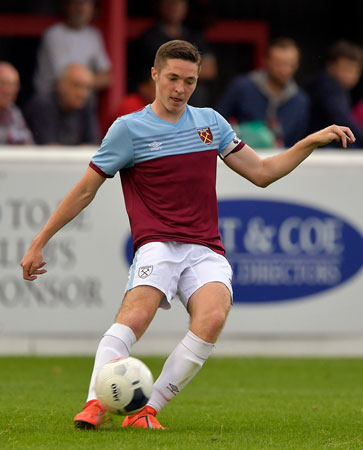 Tireless pressing from the midfield trio of Alfie Lewis, Joe Powell and Coventry set the tone of the game against Fulham from the first whistle.

“Whenever you play Fulham as you go up through the academies you know they are going to be good; technically good, physically good and very quick and we expected nothing different from them," Coventry continued. "They were fairly strong to be fair to them, but I think the way that we played, with our pressing and energy, they couldn’t live with it.”

Fixtures for the U23s come thick and fast through August and September, with competitive matches and friendly games scheduled, and Coventry was keen to keep their positive opening Premier League 2 result in perspective.

“This is just the start, we have to carry on, kick-on and keep going at Newcastle," he insisted. "The first three games we want to win all three, our target is to go and win the league this season.

"We really want to get off to a good start and go and win the first three and then set some more targets after that.”

Former West Ham Academy player Rosaire Longelo is set to feature for the home side and Coventry is looking forward to facing his former teammate.

“Rosaire (Longelo) came up through the ages with us, he’s [West Ham U23 player] Manny’s [Longelo] brother and he’s a very good player. We know that they have a lot of good players and I’m sure they will be a good test.”