Matt Beard says he and his West Ham United team can take a lot of positives from his side’s 2-1 defeat to Birmingham City on Sunday.

Despite going a goal ahead through Adriana Leon’s wonderful volley on 27 minutes, the Irons suffered a loss at Rush Green Stadium, with goalkeeper Anna Moorhouse also shown a red card, meaning the Hammers ended the match with ten players.

Although Beard admitted the result, and the manner of the conceded goals, was frustrating, the head coach believes his team’s overall showing and heart in warm conditions is worthy of praise.

I think we showed a different side today a little bit with the resilience and we also showed our heart and our desire with the work rate that we put in.

“I’m pleased with the performance,” Beard told West Ham TV. “I felt we grew into the game.

“I thought our goal was excellent and then unfortunately just before half-time Anna gets sent off and it’s changed the game completely. Obviously, the frustrating thing for us is that they scored the resulting freekick.

“I think we showed a different side today a little bit with the resilience and we also showed our heart and our desire with the work rate that we put in, especially that second-half performance.

“I just think for us, obviously it’s a negative result, but it’s a positive performance. We’ve shown again a lot of character. The big issue for us was defending the set pieces, so we’ve got to rectify that for next week.”

With Leon’s finish, the Canadian international scored her third goal for West Ham since joining in January, and Beard was delighted to see the winger notch another finish.

He continued: “A fully fit Adrianna Leon will cause a lot of problems for defenders in this league. She is a very good finisher and she’s an instinctive finisher because that was a difficult chance. It’s behind her and she’s hit it full on the volley. It’s probably about 15 yards off the floor and it was a great finish from her.” 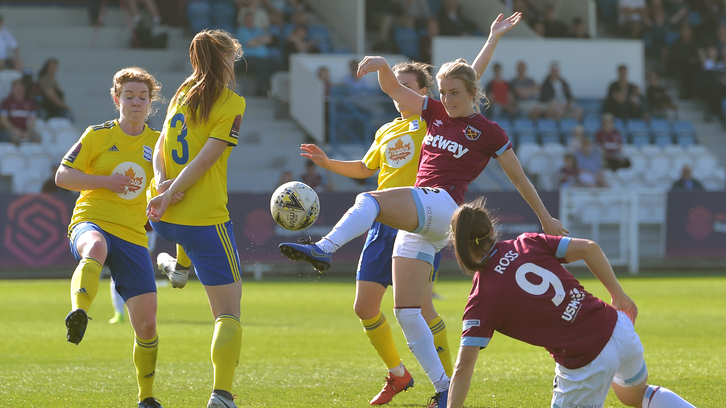 Sunday’s match also saw Kate Longhurst make her 100th appearance in the FA Women’s Super League, a feat for which she was praised by Beard.

Having worked with the midfielder at both Chelsea and Liverpool prior to West Ham, Beard knows the qualities Longhurst brings to the field and was delighted to see her reach the milestone.

He added: “I’ve worked with her at Chelsea and I took her to Liverpool and now we’re working together here. Kate gives you 100 per cent.

“Technically, she’s a very gifted player as well and I think you could see right at the end there, that little press where she ran 30 or 40 yards to chase it down. She’s just a great team player and she fully deserves to be making 100 [WSL] appearances, and hopefully, she can make 100 more.”

Rice: I want to drive my team forward like Scott Parker

Get ready for Fulham with our new Inside Irons episode
Last Match
Sunday 22 November 14:00
Bramall Lane