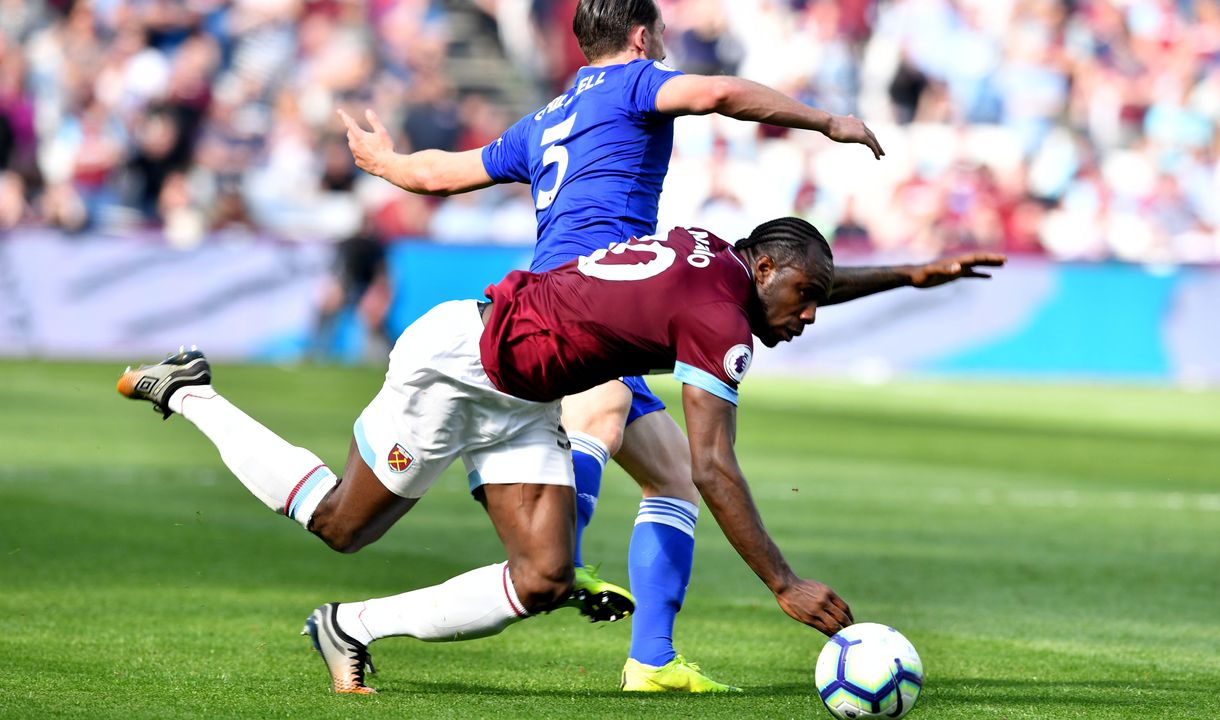 West Ham were dealt a late blow as Harvey Barnes’ stoppage time equaliser gave Leicester a share of the spoils in a 2-2 draw at London Stadium.

Michail Antonio had headed the Hammers into the lead before half-time, but Jamie Vardy’s near-post strike after the interval brought the Foxes back into the tie.

The Hammers weren’t to be deterred and, four minutes after replacing Marko Arnautovic, Lucas Perez popped up with what looked to be the winner, tapping home after Pedro Obiang’s effort rebounded off the post.

With all three points close to being secured, Leicester substitute Barnes escaped the West Ham backline before firing low into the bottom corner to extend the Hammers’ run to four games without a win.

A shining light was Jack Wilshere’s return with the midfielder making his first appearance of 2019 after recovering from an ankle injury.

West Ham started the game brighter but it was clear from the offset that the threat of James Maddison had to be nullified if they were to get anything from this match.

The promising frontman cut inside before firing an effort that was held well by Lukasz Fabianksi as the Foxes tried to assert themselves early on.

An in-swinging cross from Robert Snodgrass looked dangerous but for Kasper Schmeichel mopping up inside his six-yard box and denying Michail Antonio a decisive touch.

Leicester’s surprise 1-0 loss against Newcastle last week showed that there was still work left to do for Brendan Rodgers, but with Demarai Gray roaring down the left there’s always plenty to think about for opposition defenders.

The Hammers remained equal to their threat though and it was the Foxes’ rear-guard who had to be alert next. Some tidy footwork by Felipe Anderson played in Snodgrass whose dinked cross was clawed away from Antonio who was ready to nod in at the back post.

West Ham ought to have taken the lead just after the half-hour mark after Youri Tielemans lost possession close to goal. Felipe Anderson was quickest to react again and bent a curling shot that hit Antonio before bouncing wide of the left-hand post.

Antonio, who hit the bar as part of an impressive cameo at Old Trafford last week, was finally rewarded for his endeavours and broke the deadlock with eight minutes of the first-half remaining.

Mark Noble found space on the left to clip in a cross and it was Antonio who wanted it more, rising above Ben Chilwell to fire a header home from close range.

Fittingly timed,  London Stadium then erupted into applause a minute later to remember the late Dylan Tombides who sadly passed away five years ago this week.

It was a lead the Hammers would take into the break and, despite controlling large periods of the second-half, Leicester pulled a leveller out of nowhere. Jamie Vardy stabbed home his 16th of the season, beating Fabian Balbuena to the near-post after a timely ball in from Chilwell.

Wilfred Ndidi then came close to silencing the London Stadium crowd once again with twenty minutes to go, curling an effort that whistled narrowly wide with Fabianski rooted to his spot.

Maddison nearly created a carbon copy of the chance and, just like Ndidi, it whistled agonisingly wide as the Hammers looked to shore things up by bringing on Pedro Obiang for the impressive Snodgrass.

West Ham’s form at home has been impressive this season and, barring the blip at home to Everton last time out, Pellegrini’s men had gone six unbeaten in front of their own crowd.

They were evidently keen to finish this match strongly too and the boss looked to inject some freshness up front by introducing Lucas Perez for Arnautovic for the final 10 minutes.

It proved to be a stroke of genius from Pellegrini as the striker put the Hammers ahead with eight minutes left.

Obiang’s first-time effort from long-range cracked the post and fell kindly to the feet of Perez, with the Spanish forward tapping home into the empty net to regain West Ham’s lead.

Perez was unfortunate to not add a second when he was adjudged to have been offside after slotting past Schmeichel and, had VAR been in place, the Hammers' goal may well have stood.

The three points looked to be going to the Hammers but substitute Barnes was intent on having the last laugh, firing low past Fabianski after driving into the box and sending the Foxes fans behind the goal into bedlam.

It was a late sucker punch for the Irons who will now have to pick themselves up ahead of next week’s away trip to Spurs.