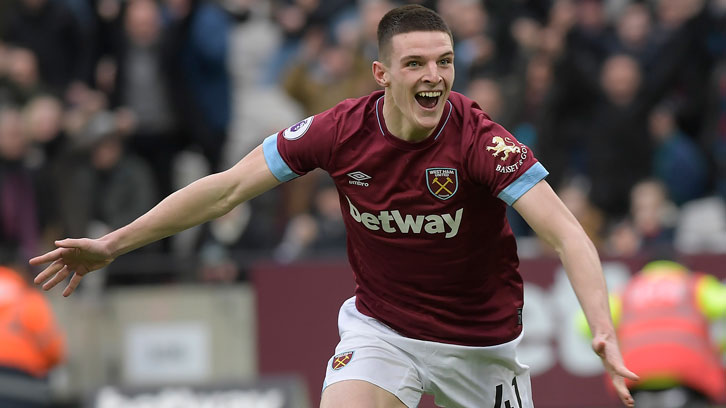 Declan Rice has been for the 2018/19 PFA Young Player of the Year award.

Rice has excelled in a deep-lying midfield position, making more tackles than any other West Ham player and ranking in the top three in minutes played, touches, passes made, interceptions and blocks.

The No41, who has played every minute of the Irons’ previous 30 Premier League matches, was delighted to receive a nomination for such a prestigious award.

It is extra special when you know it has come from the players who you play against week-in, week-out in the Premier League

“I am proud and honoured to have been nominated for the PFA Young Player of the Year award,” said Rice.

“Any time you receive recognition is welcome, but it is extra special when you know it has come from the players who you play against week-in, week-out in the Premier League.

“It has already been an amazing season for me personally and I hope now I can help the team finish strongly.”

Should he win, Rice would become the third West Ham player to be named PFA Young Player of the Year, following goalkeeper Mervyn Day in 1974/75 and striker Tony Cottee in 1985/86.

The 2019 PFA Awards will be held at the Grosvenor House, London on Sunday 28 April, celebrating the best of English football in an evening attended by hundreds of stars of the professional game, to recognise the outstanding performers in every division.

As the season draws towards its climax, the PFA Awards is a celebration of the achievement of all PFA members from the last 12 months.

Everyone at West Ham United would like to congratulate Declan on his nomination.